“It Ain’t Right and It Ain’t Wrong. It Just Is”

Another trimester of my Civil War Memory class has come to an end.  This is my second go around with this particular elective and overall I am pleased with the results.  This trimester I decided to focus the course on Civil War films.  We viewed five full-length movies and numerous small videos that span the spectrum from NPS and American Experience documentaries to YouTube videos.  I am confident that my students both enjoyed and profited from the course.

Yesterday we finished viewing the movie, Ride With the Devil, which attempts to capture the chaos of the “Border Wars” in Missouri and Kansas.  The movie follows a small band of “Bushwhackers”, including Tobey Maguire (Jake Rodell or “Dutchy”), Skeet Ulrich (Jack Bull Chiles), and Simon Baker (George Clyde), along with Jewel (Sue Lee) who plays a young widower.  The movie does a pretty good job of exploring the confusion of the guerilla war along with the intersection of ethnicity and shifting loyalties.  One of the highlights of the movie is an excellent recreation of William Quantrill’s raid on Lawrence, Kansas.

My favorite character has got to be Daniel Holt, who is a former slave but remains loyal to his former master’s son, George Clyde.  Holt’s character goes through the most dramatic transformation throughout the movie, but it is a subtle transformation.  You hear very little from Holt at the beginning of the movie.  His character sticks close to George and is routinely referred to as “George Clyde’s Nigger.”  As the movie progresses Holt emerges from the shadows as a result of George’s leave from the group and his evolving relationship with Rodell.  At one point Holt shares his full name with Rodell as well as his own personal story, including his mother’s sale to Texas.  One of the most important scenes for this character comes during the Lawrence Raid where Holt confronts a large pile of free blacks who were murdered by the very men he was fighting with.  On the trip back to Missouri from Kansas and the loss of George Clyde in battle Holt experiences his first real taste of freedom.  A bit later, Holt shares with Rodell that he will never be known as “someone else’s Nigger.”

The changes in Holt’s character take place slowly, but gradually and sets up the viewer for the final scene in the movie.  The final sequence follows Rodell, Jewel, and Holt west to start new lives.  Rodell confronts Pitt Mathieson one final time in what many anticipate will be a shootout.  After allowing Mathieson to take his leave on a suicide run into town Rodell sums up his war experience: “It ain’t right and it ain’t wrong.  It just is.”  In the final scene Holt take his leave from Rodell for one final time.  After tipping his hat to a sleeping Sue Lee and baby the two men say goodbye with a poignant gesture.  Holt rides off alone and free and in contrast with Rodell’s previous comment finally adds a morally redeeming quality to the movie.  The movie ultimately becomes a story of freedom and emancipation.

The scene is punctuated by Holt taking control of his horse and doffing his hat.  No doubt, I am making too much of it, but it reminds me of some of the most popular images of Civil War generals.  At that moment Holt embodies the glory that has traditionally been attached to these men. 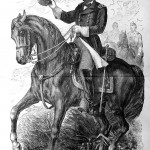 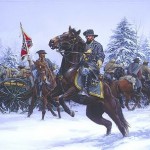 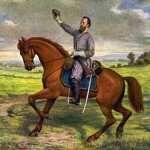