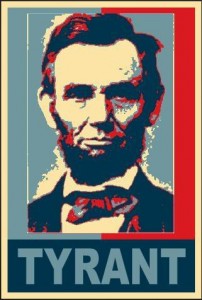 I wondered whether folks in the conservative movement would take Glenn Beck to task for his recent broadcasts in which he celebrates Lincoln’s respect for the Constitution as well as his role in ending slavery.  Well, what do you know, Thomas DiLorenzo has recently weighed in at Lew Rockwell.  Unfortunately, he does little more than infer some kind of conspiracy over at FOX News:

I suspect that the reason for this disconnect with historical reality is that: 1) The Fox News Channel is essentially a propaganda arm of the neoconservative political cabal that has captured the Republican Party; 2) One of the cornerstones of neocon ideology is Lincoln idolatry and hatred of the South and Southerners. (Professor Paul Gottfried, for one, has written extensively about this.) 3) Therefore, if Glenn wants to keep his gig at Fox, he must toe the party line on Lincoln. Being otherwise libertarian – while the Democrats are in power – serves the purposes of the neocon cabal nicely.

Over at Southern Heritage News and Views, Bob Hurst laments Beck’s inability to embrace the “Lincoln the Tyrant” narrative:

Whatever the reason, I am very disappointed in Glenn Beck and have lost a degree of confidence in the accuracy and truthfulness of other statements he has made or will make in the future. I hate this because I have had such confidence in his truthfulness and admire his courage in revealing many of his findings about powerful people and potentially explosive situations.

We will have to wait and see whether Beck recants and returns to the embrace of a view that has almost nothing to do with history.  As far as I can tell, all three individuals lack a serious understanding of Lincoln and the Civil War, but for some reason I find myself rooting for Beck.  😀

Next post: “He Has Essentially Stopped the Entire American Civil War in Virginia”