“He Has Essentially Stopped the Entire American Civil War in Virginia” 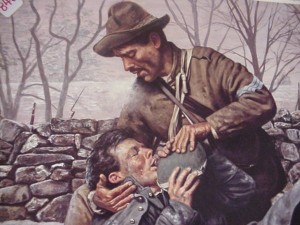 Update #2: I haven’t seen any kind of review of the movie in the local Fredericksburg papers, but Michael Aubrecht posted a few comments on his blog.  As I stated below, I have not seen the movie, but plan to do so at some point.  Regardless of the movie’s interpretation I am pleased to read that the premiere was well attended.  The folks involved put a great deal of work into this production and it’s always nice to see hard work rewarded.

Update: I want to make it perfectly clear that my comments should not be read in any way as a critique of this movie.  I HAVE NOT SEEN IT.  My comments should be understood as more general critique of the story’s continued popularity in our collective memory of the Civil War.  The movie may, in fact, take a completely different approach to understanding Kirkland’s actions and its broader meaning than what passes as the standard interpretation.  I am not even suggesting that people not attend this premiere.  If I were in the area I would love to see what Aubrecht and Ross have come up with.  More than likely I will order a copy of the film for analysis in my Civil War class.

Michael Zitz’s article on the premiere of the “Angel of Marye’s Heights” – a film about Sgt. Richard Kirkland – along with my interview, appeared in today’s Fredericksburg Free Lance-Star.  It looks like both Clint Ross and Michael Aubrecht were asked to respond to my concerns about the veracity of the story.  Unfortunately, nothing that was said challenges the core problem with this story, which is a lack of wartime sources.  Aubrecht actually suggests that skeptics prove a negative:

All I can say at this point is that every historian involved with this project, both in front of and behind the camera, to include the Fredericksburg National Park Service who are the custodians of Kirkland’s memory, have found no evidence that disproves this story.

I don’t know how anyone would go about trying to prove that it didn’t happen given the lack of evidence and it is dishonest to paint the NPS in Fredericksburg as somehow united in their belief that the Kirkland story is true.

I spent time at the Fredericksburg National Park Service researching the event, and discovered several legitimate facts and names surrounding Kirkland.  As I dove deeper into the story, I was lead to names and organizations such as The Daughters of Confederacy–The Kershaw Chapter, Mac Wycoff, Donald Pfanz, [and] Michael Aubrecht. These guys had done their research and committed years to the subject of Kirkland and the Civil War.

If there is an argument here as to why the postwar accounts ought to be accepted than make it.  Anything else is nothing less than a distraction.  There is also nothing on the website for the film that would support a specific reading of the evidence.  As Ross makes clear, however, “This film is not as much about proving the validity of the story as much as it is, well, simply telling the story.”

It’s about telling the kind of story that Americans want to hear about their Civil War.  We want to think of ourselves and even our Civil War as a reflection of our exceptionalism as Americans, that even in the heat of battle we can transcend the worst form of violence to discover our true character.  We want to believe that “Kirkland and his comrades were trying to sleep” as the Union soldiers lay trapped and wounded on the slopes below Marye’s Heights.  We want to believe that Kirkland’s “conscience took over” and that the cries of the wounded “touches his heart” even if there is absolutely no reliable evidence as to what he felt and believed.

Aubrecht sums it up beautifully in one of the trailer videos when he suggests that for one hour Kirkland “has essentially stopped the entire Civil War in Virginia.”  There is something very comforting in that thought, but it is also disturbing and inaccurate on a number of levels.  Whether it was one hour or fifteen minutes is irrelevant.  It obscures the fact that the battle of Fredericksburg extended beyond the confines of the Sunken Road at Marye’s Heights.  It ignores the suffering of the civilians who were displaced from their homes as a result of the Union bombardment and sacking of the town.  Beyond Fredericksburg, it ignores the suffering of Virginia farmers and civilians who had to deal with the hardships of war for over a year and it ignores the dangers faced on the part of many slaves, who risked their lives to escape to Union lines.  More importantly, such a claim tells us little about Kirkland, who we are to believe stands above this culture of death and suffering.  The narrative reinforces such a view in the continued resistance that Kirkland faced from his own officers when the idea of aiding his enemy was first suggested.  I want to know how many Union soldiers Kirkland killed before and after this incident, not because I am attracted to bloodthirsty stories of killing, but because he was a soldier in a horrible war.  And don’t tell us that Kirkland and his comrades had trouble sleeping following the battle without discussing the fact that there were surely soldiers in the ranks who slepped just fine and even believed that the Union soldiers deserved their fate.

In short, this story makes the war palatable for many and allows us to celebrate it without having to come to terms with its horrors.  We don’t need more of this, we need less of it, especially at a time when we have thousands of men and women in uniform fighting in Afghanistan.  We need stories that remind us of the physical and psychological effects of war rather than stories that give us a reason to celebrate war and ourselves.