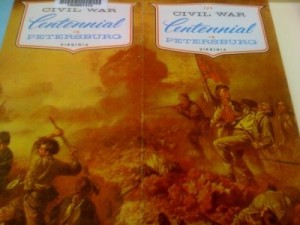 Today I made what I hope to be the final research trip for my Crater manuscript.  I recently came across an M.A. thesis at Virginia State University by Travis J. L. Stephens and decided that I couldn’t risk not taking a look at it.  In 1967 Stephens completed a thesis with the title, “Participation of Negro Troops in ‘The Battle of the Crater,’ July 30, 1864.”  I wasn’t so much interested in the tactical details of this essay; rather, I was hoping that the author would comment on the broader social and political context on the 1960s and how this influenced the decision to focus on such an important moment in black history.  [For those of you who do not know, Virginia State University is a historically black college in Petersburg.]  Unfortunately, there was very little commentary beyond the confines of the event in question.  I should have known better.  It’s an incredibly well written thesis and is one of the best tactical studies of the Fourth Division at the Crater.

I was pleased to find that Stephens dealt briefly with the massacre of black soldiers following their surrender.

The Battle of the Crater was, in addition to being of the most crucial, also the most sanguine and inhuman of the Civil War.  Never before had troops of the Army of Northern Virginia, Lee’s army, clashed with colored soldiers.  The very appearance of these former slaves in uniform agitated the Confederate troop’s hatred to a degree never previously encountered in any campaign.  Though the Confederate soldiers recognized the discipline of these Negro troops by admitting that they conducted a better assault, and gained more ground than their white contemporaries on July 30, it was also stated that these Negro troops could not endure bayonet and close-in fighting as well as the latter.  The frenzy of the Confederate troops upon being opposed by Negro soldiers was such that the rules of land warfare, previously observed when fighting white troops, were discarded.  The Negro troops were brained and butchered until even veteran soldiers became ill at the sight of the mutilated bodies…. When called upon to perform at Fort Hudson, Fort Wagner, and at Petersburg, the Negro units utilized were confronting the enemy for the first time.  One need no longer question the ability of the Negro to fight, for at each of the battles described, he not only fought, but died valiantly.

I’ve spent a great deal of time over the past few weeks surveying the way in which black Americans remembered USCTs and the Crater specifically.  It’s no surprise that this aspect of the war proved to be so attractive.  First, it provided a necessary corrective to the history of the Civil War, but it also worked to empower black Americans at at time when it was clear that a more assertive posture would be necessary in the cause of civil rights.  In other words, it allowed Americans to see themselves as soldiers in one continuous struggle that stretched back to the Civil War.  This emerges most clearly during the centennial celebrations of emancipation in 1963.  A quick survey of popular magazines such as Ebony and Jet include a wide range of colorful comparisons between the battlefields of the 1860s and 1960s.

On my way home I stopped at the Library of Virginia to check out a few scattered sources, which included a Civil War Centennial pamphlet published by the Petersburg Chamber of Commerce and featured the famous painting by John Elder.  As you can see it attests to the importance that local government and businesses attached to the Crater.  It clearly reflects the interpretation of the battle that the white power structure wished to celebrate.