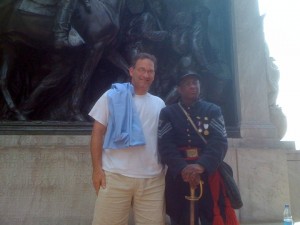 One of the highlights of my time in Boston was meeting 54th Massachusetts reenactor, Gerard Grimes. The monument to the 54th by Augustus Saint-Gaudens is by far my favorite Civil War monument and no trip to Boston can conclude without a quick stop.  The site is a wonderful case study of just how far removed the memory of black Union soldiers is from our national memory of the war.  On the one hand, the monument is in the most prominent location, just across from the state house, but for many people it seems to have little significance beyond a bus stop. Michaela and I chatted with Mr. Grimes for quite some time. He’s been reenacting for a number of years and spends his summers camped out in front of the monument to talk with visitors. During the rest of the year, Mr. Grimes works as a grade school teacher. Not surprisingly, Mr. Grimes knew nothing about this monument as a child growing up in the Boston area. In fact, he chuckled when suggesting the number of times he must have walked by it without understanding its significance.

Mr. Grimes clearly feels a moral obligation to educate the public about what is still a little known topic in American history.  And the best part is watching his face light up when discussing the history or perhaps I should say his history.