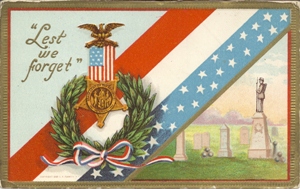 Gettysburg College historian, Allen Guelzo, has a short op-ed piece in the Gettysburg Times on the ongoing efforts to commemorate the Civil War Sesquicentennial.  Guelzo assumes a rather gloomy posture owing to the small number of states that have organized commissions, the inability of the federal government to get involved, and the continued difficulty to attract African Americans to Civil War related events.  All of these point, especially, the last one, deserve our attention and even concern, but I tend to think that Guelzo’s skepticism is misplaced.

To be completely honest, I am surprised as to what has been done already to acknowledge the 150th anniversary of the war.  There is no reason why we must officially acknowledge this milestone.  We could just as easily wait for the bicentennial year.  It would be nice to see a few more states approach the level of activity to be found in Virginia, Pennsylvania, and North Carolina, but let’s not hold our breadth.  What Guelzo misses entirely is the number of museums along with state and local historical societies, which will organize events, teaching materials, and other resources for their local communities.  How about the attention that the National Park Service will bring to all of this?  Yes, their exhibitions and events will vary in quality, but that should not be of any great concern.  Perhaps Guelzo’s concern about the number of state commissions is more about how it reflects on Americans’ overall attitude to its collective past.  He may be asking, “Are we this disinterested in our past?”  Yes and no.  On the one hand we are in the middle of a pretty bad recession, which has no end in sight.  It’s no surprise that remembering events that took place long ago through the spending of millions of dollars may not seem like the best use of tax dollars.  I happen to agree with that sentiment. On the other hand, perhaps one can make the case that there is no longer a need for a top-down model of national historic commemoration.  Information is much more easily shared via the Internet and information is much more easily accessible by a broader spectrum of the general public.  We can see this in action here in Virginia as local communities are taking the lead in organizing Civil War commissions.

Guelzo concludes with the following:

There is a much to celebrate in the 150th anniversary of the Civil War. There is also a great deal of anger and disappointment, and in some places, downright contempt. The Civil War re-enactment community mistrusts academic Civil War historians; the academics, in turn, are regarded by the public historians as gate-crashers of their collections and exhibitions; public historians suspect relic and memorabilia dealers of piracy; and the general public seems interested in history only when it’s painted-up in bizarre, horror-movie formats. These are all obstacles in the path of a worthwhile Sesquicentennial. But the greatest challenge of the Sesquicentennial will be how to synthesize the Civil War’s “old” story of battles-and-reunion with the Civil War’s “new” story of race and gender. Until that begins to happen, and until the competing re-enactment, academic, and public empires decide that they all have a common stake in the Sesquicentennial, state legislatures, historical societies, and organizations are likely to take the safe road, and call the whole thing off.

There is something to this, but it smacks of arm-chair navel gazing.  The divisions between various constituencies cannot be so easily drawn and in the case of the relationship between reenactors (general public) and academic historians, I would argue that it is simply false.  I also think that Guelzo’s characterization of the general public’s interest in the past is also way off the mark.  It doesn’t explain the popularity of Glory or the fact that last year’s Signature Conference, sponsored by the University of Richmond and Virginia Sesquicentennial Commission attracted over 2,000 people.  Guelzo is absolutely right that the biggest challenge is expanding the general public’s understanding of the war beyond the battlefield, but even here I would suggest that he misses the mark.  Here in Virginia I’ve traveled to numerous historical institutions for exhibits and lectures over the past ten years that focus on issues of race and gender.  You can even find it at the Museum of the Confederacy. [“Before Freedom Came” takes us all the way back to 1992.]  No doubt, public historians have struggled with the question of how to attract African Americans to Civil War related events, but there is no magic bullet here.  All you can do is continue to work to present the general public with projects that reflect solid scholarship and a commitment to inclusiveness.

The extent and scope of our national Civil War commemoration will reflect local urges to take steps to organize.  No doubt, we will see much more of it in certain places around the country, but we should keep in mind that it does not have to be all or nothing.

Next post: What Did Your Kids Do This Summer?