Gettysburg and Battlefield Preservation: Another Perspective 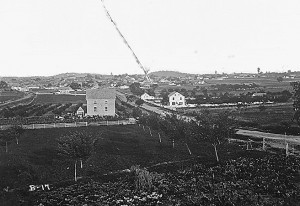 The following is a guest post by Professor Mark Snell of Shepherd University.  Professor Snell is the director of The George Tyler Moore Center for the Study of the Civil War

I will not attempt to debate Professor Cebula, nor try to address most of his points. This debate actually can be traced back to 1863—how much of the battlefield should be set aside to honor the men who fought, bled and died there—and it has been going on ever since. For anyone interested in that history, they should read Gettysburg: Memory, Market, and an American Shrine (Princeton Univ. Press, 2003), by the late Jim Weeks.

Let’s get right to the crux of the matter: Is the site of the proposed casino—the Eisenhower Inn and Conference Center, its adjacent sports complex and Devonshire Village condominiums—a place where Union and Confederate soldiers met in combat? The answer is no. We do know, however, that it was a staging area for Wesley Merritt’s cavalry brigade prior to its fight against the right flank of the Army of Northern Virginia on the afternoon of July 3, 1863. Is that, in itself, worth saving? The question and its answer are irrelevant, since the area has been developed for more than four decades.

Directly across the Emmitsburg Road (US Business Route 15) from the proposed casino are the relic remains of a failed commercial venture known as “Slippy Slide,” a water park which incorporated a blockhouse from “Fort Defiance,” another extinct tourist trap that formerly sat on the Taneytown Road near “Fantasyland,” itself a 1950s-era theme park where the current USNPS visitors’ center now sits. All of these commercial enterprises, and many more, were built in Cumberland Township with the explicit approval of the township’s supervisors, the political predecessors of the ones who recently approved the proposed casino.

For the record, I am not morally offended by a casino that could be located about 1 ½ miles from my farm. My libertarian views tell me that if people want to gamble their money away, so be it. But again, part of me wants to say, “Hey Atlantic City! How are those casinos working out for you now!”

The real issue here is not the casino itself, but the ancillary commercial development that, based on the Cumberland Township supervisors’ past record, is sure to blossom along the Emmitsburg Road. Many years ago, I was a member of the Cumberland Township Planning Commission. I eventually resigned because I believed that the supervisors seemed all too eager to yield to development pressure at the expense of historic preservation, the historic landscape and the historic viewshed.

The area in the immediate vicinity of the proposed casino is zoned “mixed use,” which, according to the Cumberland Township Zoning Ordinance, would include motels (a few older ones and two star establishments already exist there), restaurants/bars, gas stations, convenience stores, automobile/motorcycle dealers and the like. Any number of national and regional franchises could easily install a ready-made business in a very short period of time in order to take advantage of the casino’s clientele. Based on past trends of commercial development that had been approved by the township supervisors, I am deeply concerned that this tendency will continue, this time within a half mile of the South Cavalry battlefield, part of Gettysburg National Military Park. Will the presumed tax revenues—at the expense of the historic viewshed so close to the battlefield—offset the longer-term costs to local government? Ask the good people of Atlantic City, New Jersey, how it has worked out for them. And don’t forget to factor the increased bus and car traffic along the already congested Emmitsburg Road. Will that require widening of the road and perhaps traffic lights?

My main worry, as a taxpayer within Cumberland Township and Adams County, is not with rising taxes. I have witnessed rapid commercial development in the past twenty years, yet my property and school taxes have continued to rise, despite promises that business development would lower my taxes. My greatest concern—the reason that I chose to move to Gettysburg after retiring from the US Army—is the maintenance of the rural and historical environment of the area. Anyone who has visited Harpers Ferry National Historical Park can attest to the burgeoning commercial development between there and Charles Town after a casino was added to Charles Town Races. The landscape along US Route 340 between those two towns only recently—in the past two decades—had been pastoral and rural, too. It no longer looks that way.

To Americans who understand the battle, Gettysburg also is defined by the roads leading there—the military “avenues of approach” that are as much a part of the battlefield landscape as the area currently protected by Gettysburg National Military Park. But those roads, laid out in the 18th and 19th centuries, are fast losing their rural character, as anyone traveling along US Route 30 East or West of the town will see. Can we afford to continue that trend?

One last thing needs to be addressed, which was the starting point for Professor Cebula’s guest blog-posting. It’s obvious that he did not like the CWPT film. I found the film, for the most part, moving and heartfelt, but it is understandable why Dr. Cebula would question the use of “talking heads” such as Stephen Lang, Ken Burns, Matthew Broderick, Sam Waterston and Susan Eisenhower. They are not historians. They do, however, have a passionate interest in the Civil War and Gettysburg, either because they portrayed a Civil War personality on film, or produced an award-winning documentary on the subject or, in one case, spent her childhood weekends in Gettysburg. All donated their services to the Trust. All are recognizable by the American public. If CWPT just filmed egg-headed historians like Cebula and me—or even David Blight—who would want to watch it, and what impact would it have?

Will Gettysburg’s legacy be a landscape littered with crass development, or will we try to restore it to a place of national historic significance, including the areas that buffer the park? President Dwight David Eisenhower (grandfather of Susan) loved this area so much that he bought a historic farm adjacent to the battlefield and retired there. Thinking about his own “Gettysburg address,” he wrote, “When I die, I want to leave a piece of earth better than I found it.” That’s my goal, too.

Previous post: Congratulations to the Museum of the Confederacy