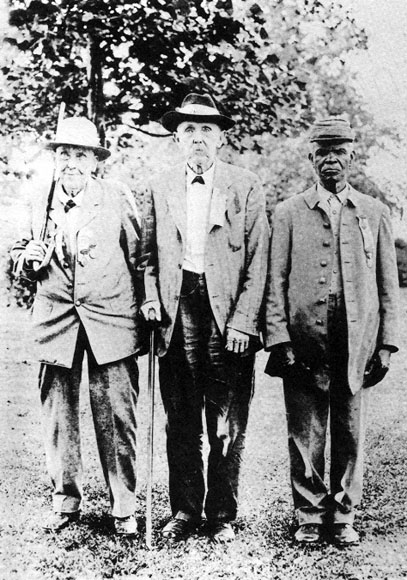 Many of you wonder why I am so focused and committed to challenging the mythology of black Confederates.  In recent weeks I’ve written about the sale of toy soldiers at the Museum of the Confederacy, a brief reference in a NPS handout in New York City, and, of course, the anticipated release of Ann DeWitt’s and Kevin Weeks’s Entangled in Freedom. I hope this story puts to rest any doubt as to why it is important that we remain vigilant.  This narrative will only become more prominent over the next few years during the sesquicentennial.  I am posting this story in its entirety from the Washington Post.  Thanks to William and Mary History Professor, Carol Sheriff, for pointing out this problem and to Kevin Sieff for writing such a thorough article.

A textbook distributed to Virginia fourth-graders says that thousands of African Americans fought for the South during the Civil War — a claim rejected by most historians but often made by groups seeking to play down slavery’s role as a cause of the conflict.

The passage appears in “Our Virginia: Past and Present,” which was distributed in the state’s public elementary schools for the first time last month. The author, Joy Masoff, who is not a trained historian but has written several books, said she found the information about black Confederate soldiers primarily through Internet research, which turned up work by members of the Sons of Confederate Veterans.

Scholars are nearly unanimous in calling these accounts of black Confederate soldiers a misrepresentation of history. Virginia education officials, after being told by The Washington Post of the issues related to the textbook, said that the vetting of the book was flawed and that they will contact school districts across the state to caution them against teaching the passage.

Masoff defended her work. “As controversial as it is, I stand by what I write,” she said. “I am a fairly respected writer.”

The issues first came to light after College of William & Mary historian Carol Sheriff opened her daughter’s copy of “Our Virginia” and saw the reference to black Confederate soldiers.

“It’s disconcerting that the next generation is being taught history based on an unfounded claim instead of accepted scholarship,” Sheriff said. “It concerns me not just as a professional historian but as a parent.”

Virginia, which is preparing to mark the 150th anniversary of the beginning of the Civil War, has long struggled to appropriately commemorate its Confederate past. The debate was reinvigorated this spring, when Gov. Robert F. Mc­Don­nell (R) introduced “Confederate History Month” in Virginia without mentioning slavery’s role in the Civil War. He later apologized.

The Sons of Confederate Veterans, a group of male descendants of Confederate soldiers based in Columbia, Tenn., has long maintained that substantial numbers of black soldiers fought for the South The group’s historian-in-chief, Charles Kelly Barrow, has written the book “Black Confederates.”

The Sons of Confederate Veterans also disputes the widely accepted conclusion that the struggle over slavery was the main cause of the Civil War. Instead, the group says, the war was fought “to preserve their homes and livelihood,” according to John Sawyer, chief of staff of the Sons of Confederate Veterans’ Army of Northern Virginia. He said the group was pleased that a state textbook accepted some of its views.

The state’s curriculum requires textbook publishers and educators to explore the role African Americans played in the Confederacy, including their work on plantations and on the sidelines of battle. Those standards have evolved in recent years to make lessons on the Civil War more inclusive in a state that is growing increasingly diverse.

When Masoff began work on the textbook, she said she consulted a variety of sources — history books, experts and the Internet. But when it came to one of the Civil War’s most controversial themes — the role of African Americans in the Confederacy — she relied primarily on an Internet search.

The book’s publisher, Five Ponds Press, based in Weston, Conn., sent a Post reporter three of the links Masoff found on the Internet. Each referred to work by Sons of the Confederate Veterans or others who contend that the fight over slavery was not the main cause of the Civil War.

In its short lesson on the roles that whites, African Americans and Indians played in the Civil War, “Our Virginia” says, “Thousands of Southern blacks fought in the Confederate ranks, including two black battalions under the command of Stonewall Jackson.”

Masoff said of the assertion: “It’s just one sentence. I don’t want to ruffle any feathers. If the historians had contacted me and asked me to take it out, I would have.”

She added that the book was reviewed by a publisher’s advisory council of educators and that none of the advisers objected to the textbook’s assertion.

Historians from across the country, however, said the sentence about Confederate soldiers was wrong or, at the least, overdrawn. They expressed concerns not only over its accuracy but over the implications of publishing an assertion so closely linked to revisionist Confederate history.

Pulitzer Prize-winning historian James McPherson of Princeton University said, “These Confederate heritage groups have been making this claim for years as a way of purging their cause of its association with slavery.”

Masoff said one of her sources was Ervin Jordan, a University of Virginia historian who said he has documented evidence — in the form of 19th-century newspapers and personal letters — of some African Americans fighting for the Confederacy. But in an interview, Jordan said the account in the fourth-grade textbook went far beyond what his research can support.

“There’s no way of knowing that there were thousands,” Jordan said. “And the claim about Jackson is totally false. I don’t know where that came from.”

The book also survived the Education Department’s vetting and was ruled “accurate and unbiased” by a committee of content specialists and teachers. Five Ponds Press has published 14 books that are used in the Virginia public school system, all of them written by Masoff.