The Sesquicentennial is Alive and Well in Fredericksburg 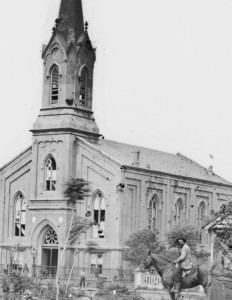 Congratulations to John Hennessy of the NPS and Sara Poore of the Fredericksburg Area Museum for organizing a wonderful event yesterday that included a rare opportunity to tour the grounds of Brompton as well as listen to historians George Rable and William Freehling.  More than 600 people attended the event at the historic Fredericksburg Baptist Church, which is quite an accomplishment given the beautiful weather as well as the subject.  Read John’s thoughts about the day’s proceedings at Fredericksburg Remembered.  John and Sara are two of the hardest working public historians in the business and I hope that the people of Fredericksburg appreciate their commitment to organizing programs for the local community that are both entertaining and educational.

One of the more interesting moments took place during the Q&A following John’s talk on the secession debate that took place in Fredericksburg.  A member of the audience suggested that the lack of slave rebellions during the antebellum period suggested to him that slaves may have, in fact been content.  No surprise that John handled the question directly and with the sensitivity that it deserved.  What surprised me, however, was that after John finished with his response a large percentage of the audience clapped.  The response suggests that these questions are no longer appropriate to ask.  Yes, we can have serious discussions about the complexity of the master-slave relationship, but thankfully we seem to have moved beyond being able to suggest that people were content being slaves.

Thanks to everyone involved for organizing this event.