Portraying Violence in the Classroom 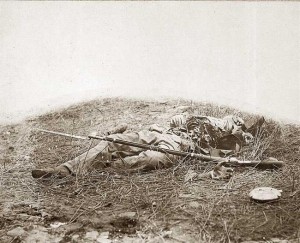 John Hennessy has an incredibly thought provoking post up over at Frederickburg Remembered, which addresses the challenges of “portraying violence” in public history.  No one is better positioned to speak on such a subject:

Having worked on or with battle sites for much of my career (which seems impossibly long these days), there is no denying the temptation to use examples of violence in public programs. Nothing gets the attention of an audience faster than the description of a horrific death or a sanguine landscape in battle’s aftermath. But, do such things really help us get our listeners to a place of greater understanding? Or are we merely indulging our own and our visitors’ morbid curiosity?

As a history teacher, who offers an entire elective on the Civil War, I can relate to the temptation that John describes.  I constantly struggle with this question when discussing battles and the experiences of the common soldiers.  My biggest problem is a strong belief that having never experienced a battlefield/combat I am simply not qualified to give voice to it.  I usually feel like an impostor when doing so.  There are a few movies that I’ve used with some success in trying to give life to a Civil War battlefield, but even here I am uncomfortable rendering any kind of judgment as to their accuracy.  I often wonder what my students are thinking when watching these scenes.  Is it simply entertainment?  Are they glorifying the event and thus minimizing the true brutality that it attempts to represent?  And I wonder, as John does, whether I am feeding my students’ “morbid curiosity.”

This is not to suggest that I steer clear entirely from the subject either; rather, I almost always allow the soldiers to speak for themselves along with utilizing other primary sources such as photographs.  The letters offer windows into an experience that most of us will thankfully never have to encounter.  My students will have their own emotional response following the reading of a letter or the viewing of a photograph.  As a teacher I do my best to guide them intellectually to a place where they can achieve some level of understanding that they can take with them after they leave the course.  Even that level of understanding must be student driven.  And in a democratic nation it is essential that we do our best to understand and appreciate the consequences of war for the individuals involved and the nation as a whole.  Most of us sailed through the last 8 years of war without having to pay much attention at all.  My students were certainly not engaged.

But isn’t that the danger here?  As skeptical as I am about my ability to properly teach the subject of war isn’t the failure to do so to be left with a generation that is simply unprepared to think critically or emotionally about the consequences of war?

Anyway, head on over to John’s site for a much more interesting discussion.

Previous post: What Does Your Civil War Soldier Have To Say?