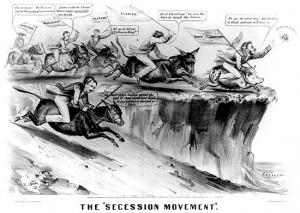 Teaching the Civil War in central Virginia offers an interesting perspective on the continuing evolution of our collective memory of the war.  My current course on the Civil War and historical memory includes students from the surrounding counties of Fluvanna and Greene as well as students who grew up in Charlottesville.  Many of the students come from families that fit into this latter category come from other regions of the country.  I spend a great deal of time listening to my students talk about their own perceptions of the war because it gives me a unique perspective on how future commemorations are likely to take shape.

What I learned today is worth sharing.  As far as I can tell there is no discernible difference between the ways in which northern children are taught to understand the cause of secession and war from what can be found in southern schools.  My students who are born and raised in the counties outside of Charlottesville – which we might suspect as being more traditional in focus – shared that they remember learning that slavery was the central issue driving secession.  I had students who attended grade school in New England and Michigan, who remember learning that slavery was ancillary and that states rights was the central reason. The difference seems to be based on individual teachers rather than anything having to do with a sharp cultural divide between regions. That said, over the past few years I’ve noticed that more and more of my students begin their study of the Civil War on the high school level with an appreciation of the role that slavery played in the events leading up to and following Lincoln’s election.

I think this is important to keep in mind given the controversy surrounding the upcoming Secession Ball that has been planned for Charleston later this month as well as future events.  If we listen too closely to the voices that populate our mainstream media we are likely to be bombarded by a language that divides rather than one that is more likely to reflect where we are in our understanding of these important historical issues.  Tonight (5pm) Chris Matthews will interview the SCV’s commander-in-chief on the Secession Ball.  I have no idea who he will be paired up with, but I can guarantee you that we will learn next to nothing about popular perception.  Rather, we will be entertained by watching one side duke it out with another and we will be left with a facile reminder that Americans are still fighting this war.  Well, that may be accurate to a certain extent, but I would suggest that it is less true than it was just a few decades ago. [Update: Looks like the interview was canceled.]

In the end I am not sure how much longer we can continue to manufacture these debates.