Let the Documents Speak For Themselves 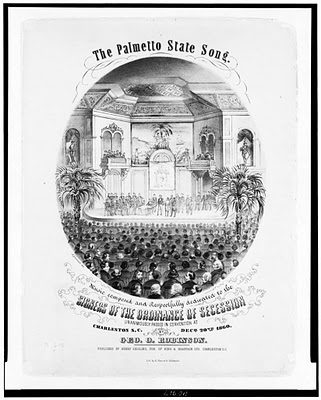 This really is the best possible time to host a blog on the Civil War and historical memory.  If the next four years follows the past year we are in for a wild ride.  At the same time there is something rather depressing about the level of discourse surrounding many of these high profile events.  Consider the upcoming Secession Ball, scheduled for next Saturday in Charleston South Carolina.  The event marks a specific event in the history of South Carolina and the nation.  While organizers trot out the standard arguments distancing their event from the role that slavery played in helping to bring about the very event that is being celebrated the NAACP is working hard to distort and butcher their own version of the past.

NAACP State President Lonnie Randolph had this to say about the upcoming gala:

“There is nothing to celebrate about killing a million people. South Carolina still lives under the rule of the Confederacy today,” Randolph said.  He compared the Secession Ball to celebrating Sept. 11, Adolf Hitler, or the American Indian massacre at Wounded Knee.   “We want some consistency. We want South Carolina — and America — to be consistent in the way it treats and honors all its citizens.” Randolph said the argument that secession was about states’ rights misrepresents the facts of slavery.  “The state wanted to right to buy and sell people. Tell the whole truth,” he said.  He spoke at a news conference at the Charleston branch of the National Association for the Advancement of Colored People, where he was surrounded by area leaders of the organization and ministers.  Handouts at the meeting encouraged attendance at the march and mass meeting with the admonition: “A Call for Unity: Don’t Celebrate Slavery and Terrorism.”

Participants will watch segments of “Birth of a Nation,” a 1915 silent film that portrayed Ku Klux Klan members as heroes….  “The states wanted the right to sell human cargo,” he said [Randolph], adding the public would not tolerate similar disrespect of other minority groups – a Holocaust celebration or an event celebrating the atomic bombing of Hiroshima. “The reason this can take place so easily is we’re still suffering the effects of the Confederacy in this state,” Randolph said.

The NAACP is not going to win any converts by pushing a narrative of the war that is heavy on emotion and rhetoric and short on historical content.

Here is what I would do to protest this event.  Station both black and white residents of Charleston in different sections of the city and at a scheduled time, during the Secession Ball, have them read the actual document that was approved by South Carolina’s secession convention.  You could organize literally hundreds of people for this.  I think it would be quite powerful to see South Carolinians take ownership of what South Carolinians in 1860.  As Larry Wilmer noted the other night on the Jon Stewart Show, highlighting the role of slavery in this event is not “politically correct, it’s correct correct.”  And that’s it.

Let the documents speak for themselves.