“Now, I am a Conservative, a Neo-Confederate so That’s My Point of View” – William Scarborough, 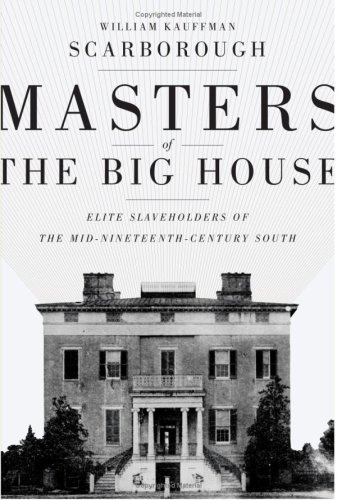 Yesterday, I linked to two videos that feature Civil War historians discussing various issues related to the Civil War and historical memory.  In the second video, the panel was asked to share what they take to be one of the most popular misconceptions of the war.  While Emory Thomas and James I. Robertson highlight the tendency among some to downplay the importance of race and slavery in the war, Professor William Scarborough offers the following curious assessment:

There is a misconception about how harsh slavery was.  I mean it was not akin to the Nazi Concentration Camps at all.  It wasn’t great, that’s for sure but it was a lot more flexible than a lot of people think today.  Now I am a conservative, a neo-Confederate so that’s my point of view.

I have no idea what one’s identification as a conservative has to do with a question about the history of slavery and its brutality so I am going to steer clear of it.  Scarborough’s identification as a “neo-Confederate” is baffling given that those who group themselves around such a label or are identified as such steadfastly resist coming to terms with its importance to the coming of the war and if they do discuss it it comes wrapped in the old “loyal slave” or black Confederate narrative.  Yes, historians have clearly shown over the past few decades that slavery was flexible in any number of ways depending on where you look and at what time.  What’s is truly baffling is that Scarborough himself has contributed to this literature on slavery and has even highlighted its brutality.  One of the most interesting studies that I’ve read about slavery is his, Masters of the Big House: Elite Slaveholders of the Mid-nineteenth-century South

(Louisiana State University Press, 2003).  It’s a thick book, but well worth your time.

Scarborough opens up chapter 5, “Toiling For Old ‘Massa'”, with the following:

Whether they toiled in the miasmic rice swamps of the South Carolina Low Country or in the broiling heat of the cotton and cane fields in the Southwest, the African American slaves of the antebellum South earned handsome profits for their owners but often at the expense of human suffering almost without parallel in modern times.  It should be remembered, however, that the condition of laboring people generally in the nineteenth century was little short of deplorable.  It was that condition that impelled Karl Marx to launch his midcentury assault against the exploitation of labor by capital in the rapidly industrializing nations of the Western world.  Indeed, with respect to the material conditions of life–food, clothing, shelter, and hours of labor–the chattel slaves of the South did not fare badly compared to their working class counterparts elsewhere on the planet.  Rather, it was the absolute denial of freedom that set them apart from other workers and often made their lot unbearable.  Slavery rendered them impotent to protect the integrity of their families and frequently exposed them to the erratic behavior of insensitive owners.

While some may have trouble swallowing Scarborough’s placing of slavery within the broader context of nineteenth century labor he still makes the point about the brutality of slavery, which, at its core involved the denial of freedom and the treating another individual as a means to an end.  Unfortunately, I don’t think such a paragraph and the book as a whole qualifies Prof. Scarborough for “Neo-Confederate” status.  This is historical scholarship at its best.  No “Gone With the Wind” fantasies in this book.

Next post: No One Needs To Give You the Opportunity to Speak