No One Needs To Give You the Opportunity to Speak 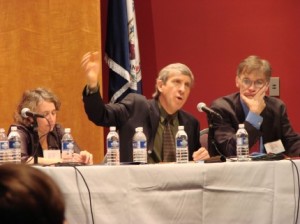 The other day I posted two videos of some of the most respected Civil War historians writing today.  The group had taken part in a conference sponsored by the Citadel and were asked to share some thoughts about popular misconceptions of the war as well as the upcoming sesquicentennial.  Anyone familiar with Civil War scholarship is familiar with their names as well as their scholarship.  However, there was some frustration expressed in response to the videos, not because of anything having to do with the content, but with the decision to invite the same cast of characters.  One reader expressed it as follows:

Give us the opportunity and we’ll speak, but I’d wager that the producers of these videos sent out an e-mail blast to the usual suspects, and no young scholars. It’s the nature of the profession that those better established will have the podium, and those of us in the beginnings of our careers will be struggling to have our voices heard. In general, and especially in public history, we’re all having a tough time getting that podium because the folks inspired by the centennial are still firmly ensconced in the positions they obtained thirty and thirty-five years ago. Give us a microphone and we’ll talk your ear off, but until someone offers us the stage we can’t help out with any efficacy.

In one breath you ask “where are our younger scholars taking an active role in this?” and in the next you claim that “no one would give such responsibility to young people today.” It is this major disconnect, this distrust of us to do justice to the history, which keeps our voices out of the sesquicentennial. We are an ipod and youtube generation, but that doesn’t diminish our interest or scholarly aptitude.

I certainly understand the frustration and, to a certain extent, I sympathize with such a view.  However, it rests on a faulty assumption and that is that we need to wait for someone to give us the opportunity to speak.  I am the first person to admit that it’s always nice to receive an invitation to take part in an academic conference or panel discussion and other such events that have a traditionally scholarly flavor.  But to be completely honest, these types of events make little sense to me in an age of social media.  Events such as this are opportunities to catch up with friends and check out new books.  The sharing of ideas could be done much more effectively online.   I do my speaking and connecting with people here.  This is my podium and this is where my voice can be heard.  I connect with more people in one day here at Civil War Memory than I would in roughly 10-20 standard conference presentations. [Update: Let me just clarify that I am not suggesting that the traditional conference format no longer has any value.  I should have been more careful with how I characterized such events.  Of course, I attend these events to listen to top-notch scholars and, on occasion, to share my own ideas.]

As much as I respect and enjoy listening to the folks included in those videos those are not the voices that will be heard over the course of the next few years.  It’s going to be those individuals who figure out how to effectively utilize the many social networking tools that are currently available.  Consider my friend, M. Keith Harris, who recently finished his PhD in American history at the University of Virginia and now lives in Los Angeles.  Keith specializes in the Civil War and historical memory [see his, Slavery, Emancipation, and Veterans of the Union Cause: Commemorating Freedom in the Era of Reconciliation, 1885-1915, Civil War History – September 2007, pp. 264-290] and he is also a fitness nut.  Keith does not currently hold an academic position, but that has not prevented him from finding interesting ways of sharing his knowledge and building an audience.  You can find Keith at his blog, Cosmic America, on Twitter, and on UStream, where he is currently in the middle of a series of lectures on the Civil War.

Whether you approve of Keith’s style or not, he is not sitting around waiting for someone to provide him with an audience.  He is creating one from the ground-up.  The author of the above comment is right to point out that this is an iPod and YouTube generation, but that is not something that ought to be frowned upon, but rather embraced.  It’s exactly the generation that has the potential to revolutionize what it means to engage in scholarly discourse as well as connect with others.

Previous post: “Now, I am a Conservative, a Neo-Confederate so That’s My Point of View” – William Scarborough,