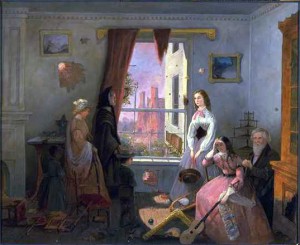 Civilians During the battle of Fredericksburg

Unfortunately, this year’s picks are based on a slightly shorter list of books than in the past owing to the amount of time I spent over the summer revising my book manuscript on the battle of the Crater.  However, that didn’t prevent me from reading a fairly large number of books that are worth acknowledging at the end of another year.  Thanks to all of you for taking the time to read, comment, and consider what I have to say.  I have no plans to quit blogging.  In fact, the popularity of this site continues to grow and continues to open up new opportunities for me that I could not have imagined just a few short years ago.  The coming year promises to be another good one on both the professional and personal fronts.  I hope all of you are enjoying the Holiday Season.

Best Civil War Blog: This was one of the easiest choices that I’ve had to make in this category since starting this list.  While there are plenty of good Civil War blogs to choose from only a select few stand out to me as important resources for both scholars and general enthusiasts.  John Hennessy’s Mysteries and Conundrums is hands down the most important Civil War blog in our little corner of the blogosphere.  M&C is the group blog of the staff at the Fredericksburg and Spotsylvania National Military Park and while Hennessy is the most visible writer other contributors include Noel Harrison, Mac Wycoff, and Eric Mink.  Their blog offers a behind-the-scenes look at the complex process involved in interpreting some of America’s most sacred and controversial historic sites.  The site offers interested readers a primer on how public history is done and it does so by engaging the public as an integral part of the process.  No other website or even published study has taught me more over the past year about the history of the Fredericksburg area, public history, and Civil War memory.  Thanks to John and the rest of the staff for inviting us inside, showing us how it is done, and for providing a blueprint that other historic sites can employ.

Best Campaign/Battle Study: Earl J. Hess, Into the Crater: The Mine Attack at Petersburg

Next post: I Hope All of You Have a Merry [confederate] Christmas!