How Does This Fit Into the Lost Cause? 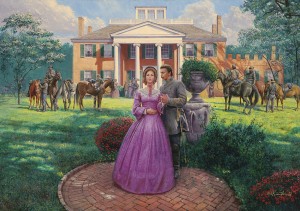 I Guess She Didn't Need Him After All

I just wrapped up a wonderful visit with a former student from Alabama that I have not seen in ten years.  It’s always nice to see how these kids turn out.  Anyway, this student comes from a fairly prominent Alabama family with its share of family stories.  One of those stories struck me as very interesting and I am curious if anyone can recommend further reading.

It turns out that this woman’s great grandfather supplied southern widows with adult novelties in the wake of the Civil War.  I know, I know…this is not something we want to acknowledge at least for those of us who harbor conservative views of women or images of Melanie Hamilton.  It turns out that this drastic change in profession eventually cost him his marriage.  The story has stayed within the confines of the family for the obvious reasons and I have no reason not to believe it, but I am curious if anyone has done serious research on this aspect of widowhood.  I am familiar with Thomas Lowry’s book, but I don’t believe he addresses this.

Given Victorian attitudes toward sex I assume that evidence of such a market would be hard to come by.  What do you think?

Next post: Can the NAACP Get Right With the Civil War Sesquicentennial?