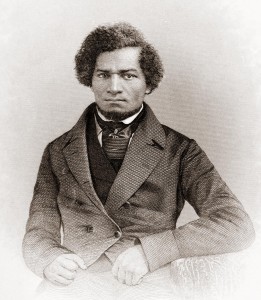 Tomorrow my American Studies classes will begin to discuss Narrative of the Life of Frederick Douglass.  I can’t tell you how many times I’ve read it, but I still look forward to every opportunity to revisit this book.  At some point I would like to teach an elective on the history of the nineteenth-century through a close examination of Douglass’s life.  As I was making my way through chapter 3 [pp. 20-21] I came across one of my favorite passages in which Douglass explores the complexity of the master-slave relationship.  In it he explains what appears to be the language of the loyal and contented slave.

It is partly in consequence of such facts, that slaves, when inquired of as to their condition and the character of their masters, almost universally say they are contented, and that their masters are kind. The slaveholders have been known to send in spies among their slaves, to ascertain their views and feelings in regard to their condition. The frequency of this has had the effect to establish among the slaves the maxim, that a still tongue makes a wise head.  They suppress the truth rather than take the consequences of telling it, and in so doing prove themselves a part of the human family. If they have anything to say of their masters, it is generally in their masters’ favor, especially when speaking to an untried man. I have been frequently asked, when a slave, if I had a kind master, and do not remember ever to have given a negative answer; nor did I, in pursuing this course, consider myself as uttering what was absolutely false; for I always measured the kindness of my master by the standard of kindness set up among slaveholders around us. Moreover, slaves are like other people, and imbibe prejudices quite common to others. They think their own better than that of others. Many, under the influence of this prejudice, think their own masters are better than masters of other slaves; and this, too, in some cases, when the very reverse is true. Indeed, it is not uncommon for slaves even to fall out and quarrel among themselves about the relative goodness of their masters, each contending for the superior goodness of his own over that of the others. At the very same time, they mutually execrate their masters when viewed separately. It was so on our plantation. When Colonel Lloyd’s slaves met the slaves of Jacob Jepson, they seldom parted without a quarrel about their masters; Colonel Lloyd’s slaves contending that he was the richest, and Mr. Jepson’s slaves that he was the smartest, and most of a man. Colonel Lloyd’s slaves would boast his ability to buy and sell Jacob Jepson. Mr. Jepson’s slaves would boast his ability to whip Colonel Lloyd. These quarrels would almost always end in a fight between the parties, and those that whipped were supposed to have gained the point at issue. They seemed to think that the greatness of their masters was transferable to themselves. It was considered as being bad enough to be a slave; but to be a poor man’s slave was deemed a disgrace indeed!

Next post: We Are Not Living in Lincoln’s House Divided

Previous post: Developing Historic Land To Save It in Petersburg