We Are Not Living in Lincoln’s House Divided 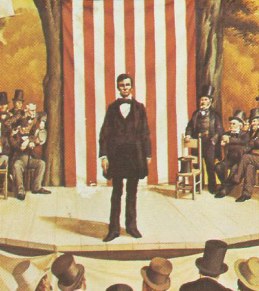 This weekend’s shooting in Tuscon, Arizona has led to a great deal of commentary about the intense partisanship that currently animates our political discourse.  I am as concerned as the next person about the short- and long-term consequences of a political landscape and media culture that seems to have little patience for rational debate.  To be honest, I don’t know where this most recent shooting fits into all of this.  That said, I tend to take a cautious view of the doomsday scenarios because I think they tend to contribute to the toxic atmosphere.

As a historian I understand the desire to place this shooting as well as broader concerns surrounding our political and cultural wars within a historical context.  Allen Guelzo gives it a shot in this interesting commentary on what the Civil War can tell us about the fine line between words and violence.  Guelzo expresses concern that “that the lids are rattling again” because the issues at stake strike at a difference over fundamental values:

This is why the political battles over specific policies have become so intense – because they are all linked to a fundamental collision of values about justice. The new health-care law, for example, is not merely another entitlement; it springs from a new way of understanding what justice is, and thus it ends up entirely rewriting the relationship of citizens to the state. Likewise with “don’t ask, don’t tell” and gay marriage. These are not merely variations on sexuality and marriage; because they represent an entirely new way of thinking about human nature, they bring into question our understanding of what Jefferson called “the Laws of Nature and of Nature’s God.” Today’s passions are not merely the irritations of marginalized people with too much religion, too much talk radio, or too many guns. They are the sign of political pots ready to blow the lids off democracy.

First, I couldn’t agree more that the language has become overly hyperbolic, but that may not be a sign of impending doom for our democracy.  We may simply have become much too sensitive given the advances in communication technology.  That said, I don’t think the Civil War sheds much light on our current political culture.  As divided as Americans are over the issues mentioned by Guelzo not one of them divides the nation regionally.  We are not living in Lincoln’s House Divided.  As much as I find Lincoln’s appeal to “think calmly and well upon this whole subject” as well as “the better angels of our nature” it’s hard to imagine that we are headed down that road.

I find it interesting that few have compared our climate to the 1960s.  Perhaps this weekend’s shooting ought to remind us of the assassinations of King and Malcolm or that of Bobby Kennedy in 1968.  Somehow the nation survived a period that witnessed violent political protest, social unrest, and an unpopular foreign war.  Are we as a nation really in a more dangerous position than this?  I find it interesting that Guelzo bypasses this period, but I suspect that many who are concerned about our present trajectory have done so as well.  Perhaps it reflects the extent to which the violence and partisanship of that period has become legitimized.

I’ll end with Guelzo’s final thought and one that I completely agree with: “Democracy lives by reason and persuasion, not by statute or decree. Its purpose is not to give us what we want, but to free us to do what we should.”

Next post: Stephanie McCurry on Power and Politics in the Civil War South