Where Is Your Southern Honor?

Note: Here is a link to a short update on the Washington Post’s blog.  I will keep an eye out for some video of the news conference.  As of Wednesday morning I can’t find a single Online article from a Richmond newspaper or anything else for that matter.  Did anyone even show up to this news conference? 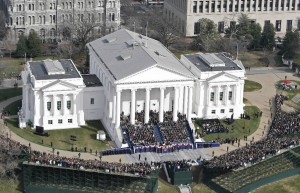 The inauguration of Governor Robert McDonnell

There is something quite pathetic about the Sons of Confederate Veterans holding a press conference to denounce Virginia Governor Robert McDonnell and former Senator George Allen for what they perceive as violations of Confederate heritage.  As many of you are aware this battle between the SCV and the governor  started last spring over the latter’s handling of Confederate History Month.  I am not going to rehash that debate in this post so I encourage you to go through my old posts if interested.

Their argument is nothing new: Civil War history has become overly politicized and taken hostage by liberal academics and other illegitimate groups that have prevented the SCV from acknowledging and commemorating their ancestors.  These groups have successfully lobbied the governor to shun the SCV and their history as well as the roughly “2 million Virginia citizens [who] can trace their ancestry to a soldier who fought in the Confederate army” – the implication being that if you are descended from a Confederate soldier you automatically subscribe to the SCV’s preferred view.  Such a view paints the SCV as the victims of a conspiracy or even as modern day warriors defending a lost cause.  We are to believe that past celebrations of Confederate leaders and their cause from the late nineteenth century onward somehow fell outside of politics.

What the SCV refuses to acknowledge is that public commemorations of the past have always been politically charged.  The only difference is that up until the 1970s Confederate heritage groups functioned in an extremely narrow playing field, in large part because local and state government reflected a narrow profile of the state’s citizenry.  Make no mistake, multiple narratives of the war were always present in various corners of the state, but without political support those narratives failed to make their mark in public pronouncements and on well trod public spaces.  This is one of the narrative threads that I explore in my forthcoming study of the battle of the Crater and historical memory.  [Yes, I am pleased to report that my ms. is one big step closer to publication.  I hope to be able to make an announcement in the very near future.]  By the turn of the twentieth century one would be hard pressed to find signs of any black presence in the form of historical markers and monuments on the battlefield or in the form of commemorative events as well as printed materials.  It’s as if the battle didn’t include a single black individual.  Interestingly, the one black participant in a well attended reenactment that took place on the battlefield in 1903 turned out to be a servant of Stonewall Jackson.  Even as late as the Civil War Centennial the battlefield reflected almost nothing of the sacrifices and heroism of an entire division of USCTs.  Throughout this period, however, a black counter-memory of the battle and war was alive and well.  In Petersburg the participation of black soldiers was openly celebrated by black militia units until the Virginia governor disbanded them at the height of Jim Crow and the in the 1960s the local chapter of the NAACP and Virginia State University remained vigilant in educating the city’s black youth.  Not until the 1970s did the change in the profile of local and state government open up space for additional voices and additional historical narratives.

In claiming that history has become overly politicized what the SCV is really asking us to do is return to a time when their voice spoke for everyone.  They are asking us to ignore scholarly advances that deepen and broaden our understanding of the war in Virginia and beyond.  They demand that prominent public spaces continue to reflect a time when only one view of the past was publicly acknowledged and they cry foul when textbooks that include inaccurate statements are removed from the classroom. Never once do they acknowledge the monopoly of influence that they enjoyed at the highest levels of state government.

What we see today at the beginning of the Civil War Sesquicentennial is a healthy and vibrant collection of stories that now occupy a prominent place in our public spaces.  If the SCV has any hope of surviving they are going to have to make their case in this new playing field.  They are going to have to explain why they ought to be viewed as the voice for the memory of Confederate soldiers.  Holding a press conference to issue a formal complaint is nothing less than an admission that they cannot engage the public with serious history.  Governor McDonnell has done nothing to prevent the SCV from commemorating the Civil War and Confederate soldiers.  Unfortunately, rather than engage the general public like every other organization the SCV has decided to surrender the field and admit defeat.

Where is the honor in that?