Is W.E.B. Dubois Allowed To Compare the Civil War and Reconstruction With Nazi Germany? 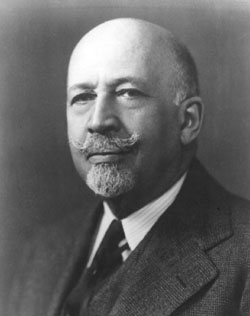 My American Studies course is currently making its way through Reconstruction as part of a broader look at the history of race.  From here we move on to the twentieth century and the Civil Rights Movement.  Reconstruction readings include Frederick Douglass, Booker T. Washington, and W.E.B. Dubois.  For our Dubois selection we decided to read his 1943 essay in the journal, PHYLON, titled, “Reconstruction, Seventy-Five Years After.”  It allowed the class to make connections between the three authors’ views of Reconstruction as well as the racial context of WWII.  Analogies between the Civil War and Nazi Germany come up fairly frequently on this blog and others, but our tendency is to resist the urge given the strong emotions that they engender as well as the sloppiness that almost always frames the discussion.

On the other hand, here we have an African American looking back on the history of the Civil War in the middle of WWII.  Dubois can’t help but make the connection in the process of reminding his readers just how crucial African Americans proved to be in preserving the Union:

We are today contemplating with uncertainty and fear the steps that must be taken in Germany by the victorious allies after the overthrow of Hitlerism.  Suppose it were true that the only way to restore Germany in a form which would make it impossible for her to be for a generation if not forever, a menace to the peace of the world, was to put political and social power into the hands of a mass of people who had long been victims of German oppression and who now desired freedom, work, land and education?  Suppose that when the Allies marched into Germany, they found thirty-five per cent of the population, friendly and sympathetic, but hated by the Germans as the Jews are hated; and in contrast to the Jews, ignorant, poor and sick, because of slavery and exploitation for two hundred and fifty years; would there be the slightest doubt but that this suffering and oppressed people would be fixed upon by the conquerers as the God-sent instrument for the reconstruction and democratization of Germany? ….

And what is true in the South faces the nation in this Second World War.  No matter what we may think and say of Germany, by singular paradox the race-religion which Germany has suddenly thrust to the front, is but an interpretation of what America and Europe have practiced against the colored peoples of the world.  No matter who wins this war it is going to end with the question of the equal humanity of black, brown, yellow and white people, thrust firmly to the front.  Is this a world where its peoples in mutual helpfulness and mutual respect can live and work; or will it be a world in the future as in the past, where white Europe and white America must rule “niggers”?  The problem of the reconstruction of the United States, 1876, is the problem of the reconstruction of the world in 1943.

It should be remembered that Dubois wrote this before the liberation of the Concentration Camps in 1944-45.  I actually think that this helps to strengthen rather than weaken his analysis.