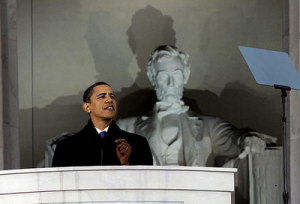 Well, historian and Sons of Confederate Veterans member, Greg Clemmer thinks so.  Clemmer is the author of Valor in Gray: The Recipients of the Confederate Medal of Honor, which was published back in 1997.  Unfortunately, he is one of the few voices of reason within the SCV.  Consider what he has to say about Lincoln’s birthday as well as his reasons for attending commemorative events at the Lincoln Memorial:

We have already touched on answers to that first question in previous Examiner articles. Yet most students of the war recognize that the Lincoln Memorial is a monument to democracy … that it is for everyone … that it primarily honors the martyred president’s success in restoring the Union … and that it remains a vivid reminder of our ongoing challenge to bind up the nation’s wounds….

Most recall that over the years the Lincoln Memorial has hosted a number of epic events, from contralto Marian Anderson’s live performance before 70,000 and a national radio audience in 1939, to Martin Luther King’s “I Have A Dream” speech in 1963, to the inauguration celebrations of George W. Bush in 2001 and Barack Obama just two years ago. Yet few know that this memorial was built of Indiana limestone and Colorado marble, or that Daniel Chester French sculpted Lincoln’s seated figure out of marble from the hills of Georgia….

Yes, just as aged Confederate veterans attended the Lincoln Memorial’s original dedication in 1922, there has been a “Confederate presence” at the monument on this day down through the years. Representatives solemnly present a wreath to honor Lincoln, but a wreath accompanied by that Confederate battle flag—yes, the most recognized symbol of the civil war—walked across those marble steps in remembrance of the sacrifice of both sides … yet signifying to all, the binding up of the nation’s wounds.

Clemmer’s column serves as a reminder that there is a long history of Southern admiration for Lincoln and not simply among black Southerners.   On February 12, 1928, the Virginia House of Delegates rose for the first time in respect for Lincoln’s memory and adjourned “in honor of…the martyred President of the United States, whose death was a distinct blow to the South, resulting in a national calamity.”  Not surprisingly, a number of public figures, including Lyon G. Tyler (son of of the president) and Reverend Giles B. Cook (Lee’s staff) offered a request to “to Repeal the Resolution of respect for Abraham Lincoln, the Barbarian…” and an eleven-page resolution.  At least one newspaper editor encouraged its readers to “put aside old animosities.”

Consider the following 1929 survey of 4,658 boys and girls in Alabama living in Mobile, Montgomery, and Birmingham done by David Spence Hill.  Hill asked the following: Of all persons whom you have heard, or read about, or seen, whom would you most care to be like or resemble”?  One third of the boys and 60% of the girls named a relative or personal acquaintance; however, when it came to historic and public figures their answers were quite telling.  Of the boys, 26% chose Washington while both Abraham Lincoln and Robert E. Lee came away with 5% each.  The girls also overwhelmingly chose Washington, but Lincoln earned 3% while Lee only earned 2%.  Barry Schwartz’s analysis of the data is worth repeating in full: