This Is Not a Confederate Flag

Things are a bit slow around here as I continue to pack up my library and work to get the house ready to show.  I have to say that I’ve begun to embrace the downsizing of my library.  I’ve never had a bibliophile’s attachment to books; rather, they have always held an instrumental value based on the information contained.  It really is time for me to embrace more practical methods made possible through digital sources. 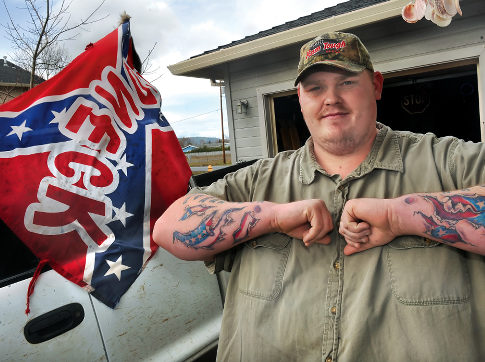 In the news it looks like our favorite “Redneck” has, in fact, been fired from his bus drivers position.  I feel bad for the guy, but it’s hard not to think that he brought this on himself given the regulations of his employer.  Ken Webber will be represented in court by the Charlottesville-based Rutherford Institute.  In my ten years living in this city I’ve not once heard of this organization.

Let’s just get one thing straight: Mr. Webber is not flying a Confederate flag.  He is flying a banner that resembles a Confederate flag.  It’s a salient distinction in this case.  There is no evidence that Mr. Webber is a racist and beyond the casual language of “states rights” and rhetoric of individual freedom there is no evidence that this has anything to do with the Civil War.  And, from what I can tell, this has nothing to do with anything resembling a “heritage” violation or attack on “the South.”

There is nothing to see here.  Look Away, Look Away…