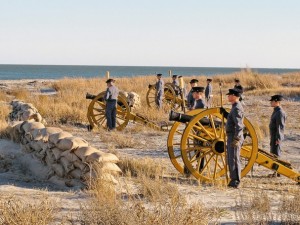 This past weekend I took part in a conference on the Civil War and public history at North Carolina State University.  I heard a number of interesting presentations and I will likely comment on them over the next few weeks, but for now I want to say a few quick words about one specific point made during the course of the day.  A number of the presentations, including my own, addressed issues relating to the continued interpretive divide that still exists between historians and segments of the general public.  You can guess which organizations were mentioned at one point or another as examples of this resistance.  In response to John Hennessy’s keynote address Peter Carmichael encouraged the audience to “declare victory” in reference to the interpretive wars.  He is right.  Public historians working in a wide range of historical institutions are now interpreting the war from a much broader perspective that includes the stories of individuals and groups, who have for far too long been left out of our collective memory.  The difficult issues such of slavery and race are now being explored from every possible angle.  Finally, the recent focus on historical memory has made us all more sensitive to the consequences of being left out of the nation’s collective memory.

I’ve been suggesting something along the lines of a declaration of victory for some time now.  The calls of “revisionism” and emotional defenses of “Southern heritage” are little more than a reflection of an intellectual bankruptcy that was always present in many of the more traditional interpretations that tended to focus more on emotional defense as opposed to an analytical understanding of the past.  John Hennessy hit the mark in his keynote address when he noted that the Civil War is one of the only places in American history where the personal anecdote is expected to frame the national narrative.  You know what this looks like: My great grandfather never owned slaves….

Evidence abounds to support a declaration of victory.  We can see it in the work of the Virginia Sesquicentennial Commission as well as the commission in North Carolina, the most recent exhibit at the Virginia Historical Society, and the numerous programs sponsored by the National Park Service.  If you have any doubt survey the events scheduled in South Carolina to commemorate the anniversary of the firing at Fort Sumter.  The Low Country Civil War Sesquicentennial Commission continues its lecture series with a symposium on the causes and consequences of the Civil War and a lecture by James McPherson.  In addition to this:

Look closely and you will see the triumph of social history and a willingness to confront some of the tough questions of race.  In April 1961 the top story was the unwillingness of the Francis Marion Hotel to register Madaline Williams, who served as New Jersey’s black delegate to the Civil War Centennial Commission.  The commission was scheduled to meet as part of the city’s Fort Sumter celebrations.

Fifty years later and black and white Americans have the opportunity to travel to Charleston to learn.  Now, that’s progress on any number of fronts.

Next post: The Real Price of Forgetting the Past (Continued)

Previous post: Your Own Confederate Village (Loyal Slaves are Extra!)