Even the Public Historians Have Been Seduced 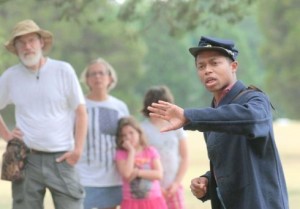 The History News Network has just posted an editorial by Steven Conn on the Civil War Sesquicentennial.  Conn offers an overly simplistic reading of the evolution of Civil War historiography through the Civil Rights Movement before closing his essay with the following:

Sadly, 150 years after Edmund Ruffin fired on Fort Sumter, large numbers of Americans remain in the thrall of a romanticized Confederacy.  At Civil War reenactments far more people show up dressed as Johnny Reb than as Billy Yank.  The fact that it is acceptable to put a Confederate flag on a car bumper and to portray Confederates as brave and gallant defenders of states’ rights rather than as traitors and defenders of slavery is a testament to 150 years of history written by the losers.

I’ve come to expect this kind of silliness from newspaper reporters, who are looking for a quick story that follows a narrative line that most of us can easily relate to, but Steven Conn teaches Public History at Ohio State.  I expected better.

We should take stock of the important changes that have taken place in our collective memory of the Civil War.  No, we don’t have any hard data beyond a few polls that have been released in the past few weeks, but there is a great deal of evidence pointing in this direction. What exactly is preventing us from breaking out of what I am now calling the “Continuing War Narrative”?  The governor of the state that included the former capital of the Confederacy recently released one of the most thoughtful Civil War proclamations.  The sesquicentennial commissions of former Confederate states are engaged in activities that would have been impossible to imagine 50 years ago.  Museums and other historical institutions throughout the nation are presenting the general public with programs that introduce the latest Civil War scholarship.

This continuous loop of not having enough reenactors to play “Billy Yank” perhaps tells us something about that specific demographic, but it certainly doesn’t shed any light on broader public perceptions.  And as for the Confederate flag, well, do we really need to go there?  I’m not suggesting that some kind of victory be declared over the interpretive problems that have plagued Civil War historiography and, by extension, the form it took in popular culture, but we would do well to acknowledge the changes.  We should do so if only to more precisely point out the gaps and distortions that persist.

Whatever we do, let’s stop beating ourselves silly with this Continuing War Narrative and take stock of how far we’ve come.