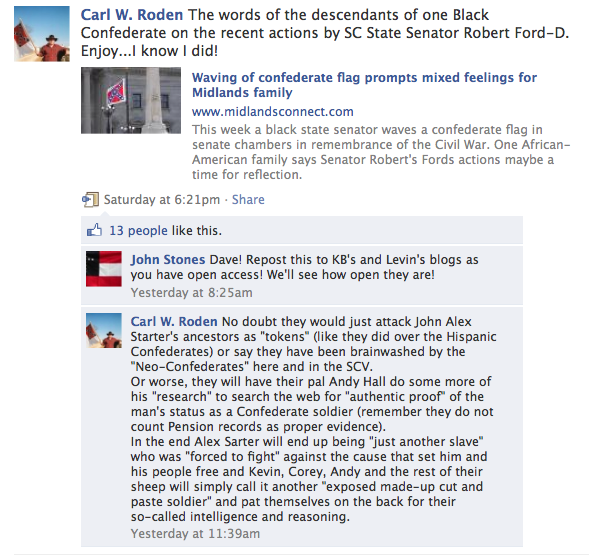 There is no better place to explore the intellectual fringes of the Civil War community than Facebook.  You will find some of the most bizarre and reactionary commentary from folks who don’t seem to have any grasp of basic historical knowledge and/or analytical skill.  On my last tour of my favorite Facebook page I came across a link to a story out of South Carolina about an African American family, who claims that their ancestor fought as a soldier in the Confederate army.   The article itself is incredibly confused:

“Alice Gallman and her grandson Kevin Felder walk along the African American Monument at the State House.  A reflection on an ancestor who they say was a confederate soldier.  “He was a house servant. He kept his masters horses clean. He kept his masters clothes in order,” says Alice Gallman.  Gallman says her great uncle John Alex Sarter was a soldier in the confederate army who fought first as a slave and later as a free man.  According to the state archives Sarter’s war service made him eligible to receive pension back in the 1920’s.

What caught my attention, however, was the commentary following the link, which you can read here.  These are the kinds of folks who are committed to pushing the “Continued War Narrative” which I commented on yesterday.  They are a vocal minority and their incoherence ought to be visible to all.  I did a quick search of variations of Sarter’s name on Footnote and came up with a few city directories, but nothing that matched a Confederate muster roll.  South Carolina did indeed offer pensions to African Americans after the war, but they were given to former slaves and not to black soldiers.  Even a basic understanding of the history would have helped these two.  Unfortunately, research seems to be frowned upon in this community.

Well, at least they are honest.

Next post: Challenging the Black Confederate Myth on the Radio

Previous post: Even the Public Historians Have Been Seduced