Was the Civil War Tragic? 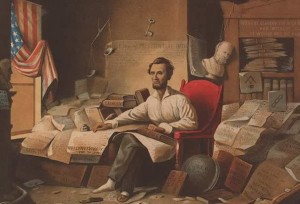 A recent post over at Brooks Simpson’s Crossroads has got me thinking about the tragic nature of the Civil War.  Brooks offers the following in response to two recent editorials by Ta-Nehisi Coates and Richard Cohen:

Was it an awful war?  Sure.  Was it tragic?  In some ways, yes, but not necessarily in the ways in which Coates contests the term.  It was tragic that white Americans could not bring themselves to realize the promise of their own revolutionary and Revolutionary rhetoric.  It was tragic that in the end they could not bring an end to slavery short of secession and war.  Doubtless Coates would agree that Reconstruction was a regrettable tragedy that illustrated the same shortcomings.  In short, even as the destruction of slavery is cause for celebration, that it had to come to that through war is cause for reflection and contemplation.  Moreover, if we continue to concentrate on the story of the destruction of slavery and the achievement of emancipation as a wartime phenomenon, we risk losing sight of the fact that what freedom meant remained undefined and incomplete, and that during Reconstruction, a truly tragic era, white Americans once more fell short of realizing the ideals which they claimed to cherish, leaving a legacy with which we still wrestle.

I tend to agree with Brooks’s assessment, but I wonder if this characterization of the tragic nature of the war reflects the continued hold that the “War to End Slavery Narrative” exercises over our collective memory.  Yes, I am reflecting on this in the wake of having finished reading Gary Gallagher’s new book, The Union War

.  In other words, our definition of what makes the war tragic reflects the value that we have come to place on emancipation and slavery, which may not match up so easily with how the citizens of the United States in the 1860s viewed the meaning of the war.

One way to explore this is to reflect on the very real possibility of the war coming to an end in the early summer of 1862.  We know the drill: George McClellan’s massive army defeats Confederate General Joseph Johnston’s army outside of Richmond and within weeks the Confederacy surrenders.  [Fill in the details however you choose.]  In that event the war would have ended without emancipation.  Under these conditions we can place into sharp focus the value that we assign the overall meaning of the war in connection to emancipation with the strong identification among millions of Americans with the preservation of the Union as the war’s greatest achievement.

Perhaps from this perspective the real tragedy is not that it took a war to end slavery, but that could have easily ended without emancipation.  But if we are going to assign a tragic quality to the war perhaps we should consider locating it closer to how the Civil War generation viewed its outcome.  In other words, we should be more willing to see the tragedy of the war in the failure to preserve the Union through peaceful means rather than a four-year bloody war.  William Gienapp once framed this as America’s greatest “failure.”

The United States did not go to war to end slavery in 1861, but it did lead directly to it followed by a concerted effort on the part of the federal government to give meaning to the freedom for 4 million slaves.  That is undoubtedly a central theme of our civil war and one that needs to be understood, but would the war have been any more or less tragic had it been concluded without emancipation?  In the end, I am still wondering whether this question of the war’s tragedy once again tells us more about how this generation has come to remember the war as opposed to the vast majority of Americans who lived through it.