People Want To Be Free 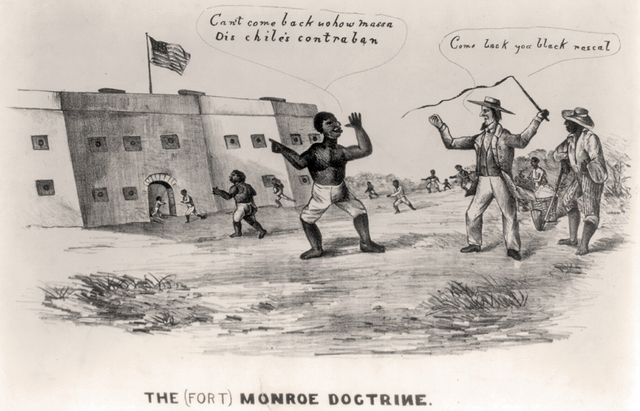 I don’t have much patience for the long-standing debate of who freed the slaves.  The question itself is much too simplistic and sterile.  Why historians have felt a need to single out one factor or engage in wholesale reductionism, in the end, tells us much more about the assumptions we employ than about the complexity of the story of emancipation that needs to be told.  Today is the 150th anniversary of General Benjamin Butler’s letter informing his superiors of three escaped slaves who had made their way to Fortress Monroe.

Since I wrote my last dispatch the question in regard to slave property is becoming one of very serious magnitude. The inhabitants of Virginia are using their negroes in the batteries, and are preparing to send the women and children South. The escapes from them are very numerous, and a squad has come in this morning to my pickets bringing their women and children. Of course these cannot be dealt with upon the Theory on which I designed to treat the services of able bodied men and women who might come within my lines and of which I gave you a detailed account in my last dispatch. I am in the utmost doubt what to do with this species of property. Up to this time I have had come within my lines men and women and their children—entire families—each family belonging to the same owner. I have therefore determined to employ, as I can do very profitably, the able-bodied persons in the party, issuing proper food for the support of all, and charging against their services the expense of care and sustenance of the non-laborers, keeping a strict and accurate account as well of the services as of the expenditure having the worth of the services and the cost of the expenditure determined by a board of Survey hereafter to be detailed. I know of no other manner in which to dispose of this subject and the questions connected therewith. As a matter of property to the insurgents it will be of very great moment, the number that I now have amounting as I am informed to what in good times would be of the value of sixty thousand dollars. Twelve of these negroes I am informed have escaped from the erection of the batteries on Sewall’s point which this morning fired upon my expedition as it passed by out of range. As a means of offence therefore in the enemy’s hands these negroes when able bodied are of the last importance. Without them the batteries could not have been erected at least for many weeks As a military question it would seem to be a measure of necessity to deprive their masters of their services How can this be done? As a political question and a question of humanity can I receive the services of a Father and a Mother and not take the children? Of the humanitarian aspect I have no doubt. Of the political one I have no right to judge. I therefore submit all this to your better judgement, and as these questions have a political aspect, I have ventured—and I trust I am not wrong in so doing—to duplicate the parts of my dispatch relating to this subject and forward them to the Secretary of War.

The letter offers a window into the kinds of questions that military commanders on the ground and politicians in Washington would have to face throughout the Confederacy as thousands of slaves took the risk to escape slavery.  I agree with Donald that it is very interesting to see Butler working through some of his own racial assumptions to acknowledge the humanity of these new residents of Fort Monroe.  For now it is enough to acknowledge one simple fact: People want to be free.