A Few Thoughts About Bruce Catton 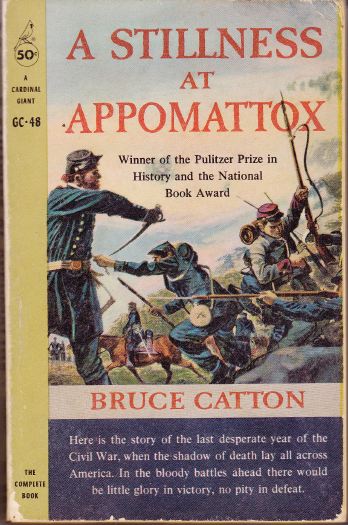 I am about half-way through Bruce Catton’s A Stillness at Appomattox and I am enjoying it immensely.  While I’ve read a few essays and sections of various books this is the first Catton book that I will read in its entirety.  It is easy to see why he is so popular and I have a much better sense of how he excited the imagination of an entire generation.  Catton was an incredibly talented writer and his sense of narrative is infectious.  On a number of occasions I found myself completely immersed in Catton’s world.  At the same time I can’t help but reflect on the book as a product of its time.

Given its publication in 1953, Stillness functioned as a wonderful example of a national history of the Civil War.  The narrative would have appealed to a wide range of Americans, who had experienced the horrors of WWII and the emergence of the United States as the most powerful nation and self-proclaimed leader of the free world.  Increasing tensions during the early Cold War period and a conscious self reflection that emphasized freedom and democracy constitute an important cultural and political backdrop necessary to understand this book’s influence.

Even in the final year of the Civil War Catton manages to maintain a clear focus on the emergence of a stronger nation.  While the reader absorbs the horrific scenes from the Wilderness, Spotsylvania, and Cold Harbor, Catton steers clear of any moral responsibility.  And while he works to bring the reader close to the precipice of a nation teetering on self destruction the reader is not allowed to lose sight of the war as a national struggle that will be resolved one way or the other.  Consider the following passage:

For of all the men who controlled and directed the war, Lincoln was the one who most deeply shared the spirit that moved across the steaming trenches at Cold Harbor–fight to the limit as long as the fighting as to go on, but strike hands and be friends the moment that fighting stops.  Before the war even began, in that haunted springtime when its dark shape was rising, Lincoln had tried to warn North and South that they could never travel on separate roads.  Win or lose, someday they would have to get along with each other again, and whatever they did before that day came had better be done in such a way that getting along together would still be possible.  The soldiers had got the point perfectly, and they expressed it very simply: Hang a few troublemakers and we’ll go home.  Mysteriously, the fighting seemed to be bringing them mutual understanding, and they may almost have been closer to each other, in spirit, than they were to their own civilians back home.  Yet there was nothing they could do about it.  They had not made the war and they would not end it.  They could only fight it.  [pp. 175-76]

The passage – as well as other sections of the book – betrays a strong conviction that Civil War soldiers were not politically engaged.  The cause of the war was “born of anger and misunderstanding” and was now being directed by politicians, but Catton’s soldiers don’t seem to give these issues much thought at all.  This has as much to do with maintaining as close to a consensus history as possible in 1953 as it does with the state of Civil War historiography.

An appreciation for the title of this book clearly emerges from the above passage.  Catton anticipates an easy reconciliation once the necessity for hard fighting has ceased.  That “stillness” is the sound of a nation reunited.  The Civil War that emerges from these pages is the great American story.  There are heroes, tragedy, great sadness, and an emerging national greatness.  In the end, the war is self contained and divorced from the fierce political debates of the 1850s as well as the consequences of the war that were only beginning to re-emerge in Catton’s postwar society.

Now, if you will excuse me, the Army of the Potomac is about to cross the James River.

Next post: Just Another Day in the Life of the Black Confederate Soldier