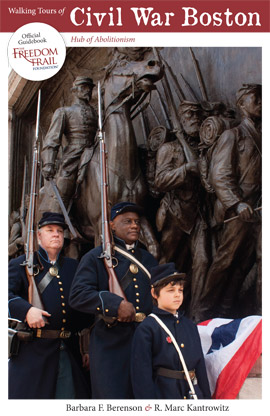 Looks like I’ve stumbled on my first public history scandal surrounding the Civil War since moving to Boston.  Before proceeding I should note that I am only vaguely familiar with the tours that are referenced in the article below.  On Wednesday I am off to Nashville to give two talks as part of the Civil War Preservation Trust’s Annual Teachers Institute, but when I return I hope to begin exploring much more of my new home.

The controversy surrounds the release of a new guidebook for Civil War Boston that was published by The Freedom Trail Foundation.  The Foundation is best known for its downtown tour of some of the most significant spots of the American Revolution, which may lead some to wonder why the organization decided to publish a short pamphlet on Civil War related sites.  Folks associated with the Black Heritage Trail are apparently not pleased with the scope of the pamphlet and its failure to acknowledge a number of important sites associated with the story of African Americans as well as the work of area institutions that are focused on black history.

You will have to read the article for yourself, but this seems like a bit of a turf war that admits of no clear answers.  Clearly, there is room here for better communication, though I have no way of knowing the history between the various  groups involved.  Perhaps some of my readers can fill in some of the gaps.

It does seem ironic that the major historical institutions in the former capital of the Confederacy may be further along in effectively integrating the story of black and white Virginians during the Civil War than the “Hub of Abolitionism.”  I am thinking specifically of the Museum of the Confederacy, the Virginia Historical Society, American Civil War Center at Tredegar, and the Richmond and Petersburg National Battlefield Parks, to name just a few.  The city has also benefited from popular figures such as Ed Ayers, who has worked tirelessly to bring various constituencies together through The Future of Richmond’s Past.

I don’t know if any of this is relevant to this little squabble, but perhaps I can follow up as I learn more about the public history scene here in Boston.