The Limits of Reunion and Reconciliation in Massachusetts 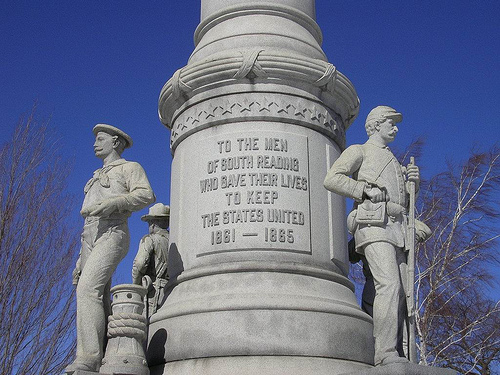 One of the things that I hope my forthcoming book on the battle of the Crater and historical memory does is find a place in a growing literature that challenges the reunion and reconciliation school of Civil War Memory.  It’s beautifully expressed by David Blight in Race and Reunion: The Civil War in American Memory

and suggests that white northerners and southerners eventually brushed aside a memory of emancipation for one that embraced a shared history as well as a set of values that allowed for a swift and relatively painless sectional reconciliation.  There is a certain amount of truth to this story.  The story of the Crater, however, simply does not follow this broad narrative outline.  The veterans of the Virginia brigade engaged in bitter feuds relating to the battle and the role of William Mahone during the few short years of Readjuster control.  Mahone learned that there were limits to which he could utilize his military career to advance a political agenda that advanced the cause of the state’s black population.  And while numerous meetings between former enemies took place on the battlefield, white southerners never adopted a language of reconciliation when commemorating the battle.  This was a decisive Confederate victory that highlighted the fighting prowess and character of their own.  The presence of a black division was simply too much for many of the veterans to forget even at the beginning of the twentieth century.

With that in mind I’ve decided to take a closer look at the veterans from Massachusetts.  To what extent does their collective memory of the war fit into this story of reconciliation and reunion?  To get at this I am going to examine the dedication speeches for the many soldier’ monuments that dot the landscape in my immediate surroundings and throughout the rest of the state.  Not surprisingly, much of the literature on soldiers’ monuments focuses on the South and those that do glance northward tend to focus on the Shaw Memorial here in Boston.  In regard to what I consider to be the most impressive Civil War monument I’ve always been interested in how southern newspapers covered the dedication of the Shaw memorial.  Another question I have is whether dedication themes went through any discernible stages during the postwar period.  Did the emphasis on the preservation of the Union come at the expense of a memory that the war brought about emancipation and the promise of equal rights?  Yes, my thinking here has definitely been influenced by Gary Gallagher’s recent study, The Union War.  Consider the following from the dedication address given on Memorial Day in 1910 in Westford, Massachusetts:

This monument is not alone a memorial for the dead but an incentive to future generations to patriotism and high ideals.  The period of the civil war had its shadows, out of which came the pure white figure of patriotism, of loyal service of generous sacrifice, of ministering angels, of tender compassion, and heroic champions of freedom and union.  So will it be with the clouds of today.  There has been no year since your service in the field when the battle has not been on, not of shot and shell, but of the clashing activities of peace—the struggle of clashing interests, out of the very selfishness of which, however, springs that human endeavor which in the long run works the ultimate steady, average betterment of all.

Glorious as were Gettysburg and Appomattox the great glory was that we had reached that degree of widening of our thoughts; that point in moral conviction and devotion in which those great victories and devotion were only the incident of the greater moral victories of freedom over slavery, of right over wrong—victories just as much for our Southern brethren as for ourselves.  Let the young men of today fight the good fight for righteousness, which is now calling them to battle, as you in your day fought the good fight for union and freedom.

That second paragraph is incredibly rich. In this case the preservation of the Union sits comfortably within the larger accomplishment of ending slavery.  If there is a hint of reunion it is couched in the observation that moral victory of emancipation was also a victory for the South and, by extension, the entire country.  That’s just one example.

Luckily, the Massachusetts Historical Society has everything I need.  Suggestions for further reading on Massachusetts veterans and monuments are greatly appreciated.  I highly recommend two new books on Civil War veterans, both of which are published by the University of North Carolina Press.  The first is Barbara Gannon’s, The Won Cause: Black and White Comradeship in the Grand Army of the Republic

and Sing Not War: The Lives of Union and Confederate Veterans in Gilded Age America

p.s. I have not given up on the black Confederate project. 🙂