The Duty of the South to Negro Education 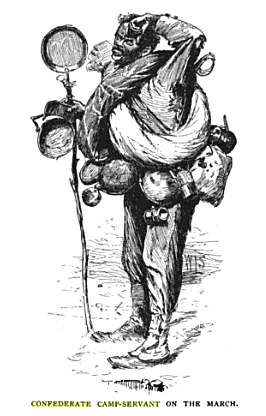 Today was one of the most productive writing days that I’ve had in quite some time.  It marks the first day of actual writing of what I’ve tentatively titled, Searching for Black Confederates in History and Memory.  The primary sources that I have collected are incredibly rich, particularly those sources related to the memory of what were commonly called camp or body servants.  Here is an example from the turn of the twentieth century.  It’s an excerpt from a speech given by Dr. Walter B. Hill, who was the Chancellor of the University of Georgia.  It’s titled, “Negro Education in the South” and was presented at a conference on education policy that took place at the University of Virginia in 1903.  The speech opens with a few words speculating as to why the state’s black population had not already taken advantage of freedom and cheap transportation costs to leave the state for the North.  This is what follows:

The Confederate Negro.—Recently a group of Confederate veterans were recounting stories of the war. One of them told of a faithful body-servant who had accompanied him to the field. The negro was captured by the Federal scouts and was given a place as cook for the colonel of a Federal regiment, with salary attached. He ran away from this cosy berth and returned to his master—bringing with him a sack of supplies and a box of the colonel’s Havana cigars, on the plea that as he had been working for the colonel and the true owner had received no wages, something was due. Then another veteran in the group told a story. It was of a day of fierce battle, of an officer shot to pieces while leading his regiment in a desperate charge—the word passed back the line—and then a negro darting forward into the very crest of the battle and in the leaden hail of bullets bearing back the body of his wounded master, and afterwards nursing him into life. When these stories had been rehearsed with that fullness of detail which was characteristic of the art of story-telling as practiced by the Southern gentleman of the olden time, one of the group, as if seized by a sudden inspiration, said: “Gentlemen, if I live to get to the Confederate Reunion at New Orleans next month, I am going to propose a monument. It is to be of black marble and” (if I shock you, remember I am quoting the words of another) “to be erected in honor of the ‘Confederate nigger.'” (Applause.)

My object in this allusion has been to enable me to say that the duty of the South to negro education, whatever we may find that duty to be, is a duty to the children and grandchildren of the Confederate negro; and this phase ought to include not only the faithful body-servant in war, but the old black mammy and the Uncle Remus who were objects of so much affection in every Southern household; and indeed all the negroes in the South who cared for and protected the wives and children of the soldiers at the front and who—strangest anomaly in history—fed by their labor the armies that were fighting against their freedom.

The reference to the faithful slave was common enough by this time, but what I find interesting is the way it is was presented as a classroom lesson that had the potential to inculcate young black Georgians into a culture that promoted continued fidelity to the white population as their ancestors had done during the war.  I will have more to say about this at a later time, but for now here is one young black Georgian, who apparently didn’t get the message.  Take a second to imagine Chancellor Hill in the audience.