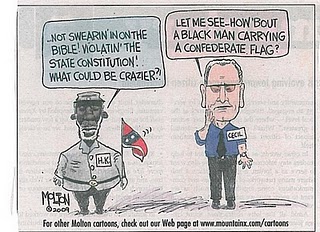 It looks like H.K. will not be performing as part of the Guyandotte Civil War Days, scheduled for Nov. 1-6 near Huntington, West Virginia. Apparently, Edgerton spoke last year at the event, but this year organizers were denied matching funds by the state’s Civil War sesquicentennial committee. That was sufficient to cancel his appearance.

Of course, one wonders why he was invited in the first place. He certainly is entertaining. His speeches have been fine tuned to garner a strong emotional response from those who have a strong need to see an African American man dressed in Confederate uniform, who fervently believes that large numbers of blacks fought in the army and that that the black population as a whole maintained the strongest ties to the Confederate cause and their masters through to the end of the war. In the trailer that I posted yesterday, H.K. calls for Lincoln to be disinterred so he can be placed on trial for war crimes.

It’s hard to believe there would be any controversy about this at all and I suspect there isn’t beyond those individuals and groups who are pre-disposed to see everything as part of a war against Southern Heritage. Is this really what the taxpayers of West Virginia should be expected to fund? Do Edgerton’s rantings help us to better understand the Civil War in West Virginia in any way shape or form? If so, I would love to hear how exactly. Keep in mind that Edgerton was scheduled as the keynote speaker for this particular event. The article refers to him as a writer, but I know of nothing that Edgerton has written that even remotely resembles a historical study.  The fundamental problem, however, is that Edgerton entertains a predominantly white audience.  African Americans simply do not perceive Edgerton as a caretaker or custodian of their story – not even a narrow sliver of that narrative.

I haven’t followed the sesquicentennial in West Virginia. There has been some controversy connected to the commission and one of my friends recently chose to resign, but this seems to me to be a no-brainer. Edgerton is going to have plenty of opportunity to sell his t-shirts during the sesquicentennial, but let’s not mistake a circus act for the many ways that Confederate soldiers and black Southerners can be respectfully commemorated.