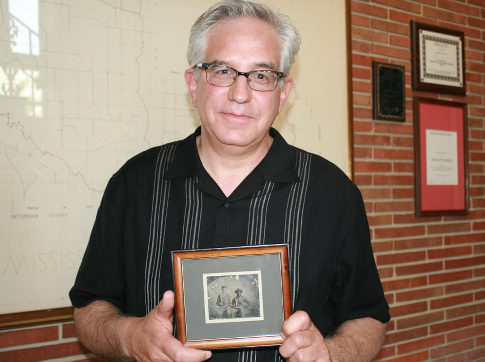 Wes Cowan of the History Detectives

Like many of you, I am looking forward to tomorrow night’s History Detectives segment, which will investigate the story behind the famous tintype of Silas and Andrew Chandler.  At various points during their investigation I offered advice on what I had learned about the story as well as my understanding of the mythology that has emerged surrounding so-called black Confederates.  My co-author, Myra Chandler Sampson also assisted the producers of the show at various points.  Both of us were scheduled to be interviewed for the show this past spring, but producers made a last minute decision to talk to someone else.  It just so happens that I will be giving a talk on Tuesday evening about Silas Chandler to the North Worcester County Civil War Roundtable in Worcester, MA.

It looks like PBS is advertising this segment as a natural marriage between Antiques Road Show and History Detectives.  Wes Cowan can be seen on both shows and he was the one who offered the initial appraisal that caused so much controversy.  What is being left out, however, is that Cowan did more than just offer an appraisal of the tintype.  He also commented on the subject at hand and while it could have been much, much worse he made a few mistakes.  First, Silas did not receive a pension from the Confederate government after the war from the Confederacy since that government no longer existed.  What he did receive was a pension from the state of Mississippi that specifically cites his role during the war as a slave.  Cowan also missed the mark on the status of slaves that could be recruited following the passage of legislation on March 13, 1865.  The legislation did leave the decision as to whether slaves would be freed if offered by their masters for service, but the War Department quickly countered it: “…General Orders No. 14 authorized the enlistment of free blacks as well as slaves whose masters signaled their approval by manumitting them before enlistment. No men still enslaved would be accepted as Confederate soldiers.”

The fallout from the ARS episode was the result of Cowan’s limited understanding of the subject coupled with a family story that was accepted without question.  That, of course, is a recipe for disaster.