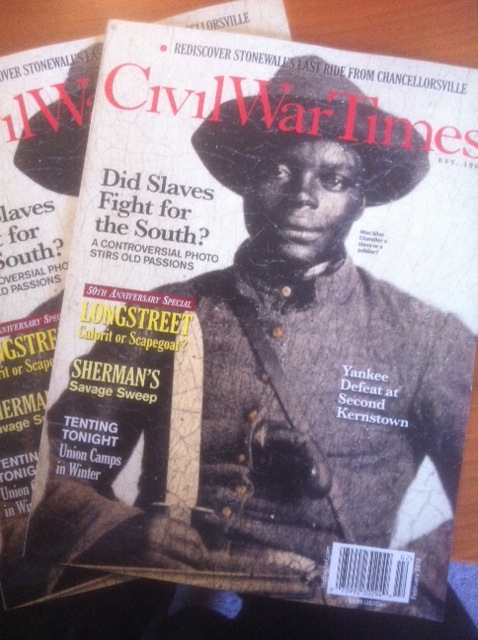 I just received my author copies of the latest issue of Civil War Times, which should hit newsstands any day now.  As you can see Silas Chandler made the cover.  I love the fact that he is pictured alone and out from behind the shadow of Andrew Chandler.   It’s powerful.  Kudos to whoever made this decision.  What Myra Chandler Sampson and I tried to do in this short article was tell as much of the story from Silas’s perspective as possible rather than the mythical story that has come to dominate popular memory.  That narrative’s treatment of Silas as a loyal slave and/or soldier is little more than a self-serving attempt to ignore or minimize the place of slavery and race in the Confederate war.  He has a much more interesting story to tell if we are only willing to listen.

Myra and I want to thank Dana Shoaf and the rest of the editorial staff for their hard work and for their agreeing to take on this manuscript.  I have no doubt that their inboxes will be flooded in a matter of weeks.  I can already anticipate the reaction.  This is my third feature article in CWT in the last year and I have nothing but the highest praise for the work they do.  Finally, congratulations to Civil War Times on this their 50th anniversary.  Included in this issue are articles by Harold Holzer, Scott Patchan, and Jacqueline G. Campbell.  They also published an essay by Glenn Tucker on James Longstreet that originally appeared in their very first issue, which I think is a great idea.

Next post: A Crater Narrative That Does Not Offend