The End of Confederate Heritage 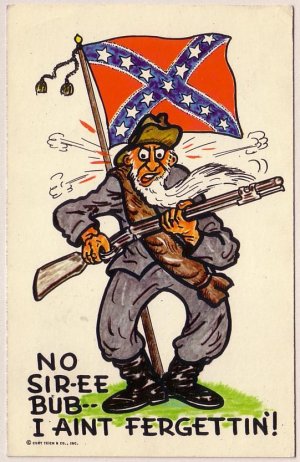 The reason why the members of the first generation of Sons of Confederate Veterans and United Daughters of the Confederacy emphasized such a strict code governing the display of the Confederate flag was that they understood the risks of it being appropriated in a way that threatened to disconnect it from its Civil War roots.  By the 1950s and 60s that battle had clearly been lost through its use as a symbol of Massive Resistance and later through its appearance on everything from cigarette lighters to bikini bottoms.  This story of a black University of South Carolina Beaufort student who chose to display a Confederate flag in his dorm window is but the latest example of this gradual decline.

So here we have a flag that was carried by the military arm of a government pledged to defend slavery and white supremacy and that remained a symbol of racism and hatred for this student’s parents has now become little more than a colorful rag in the hands of a young black man.  What does the flag mean to him?

“When I look at this flag, I don’t see racism. I see respect, Southern pride,” he said. “This flag was seen as a communication symbol” during the Civil War.

“I’ve been getting a lot of support from people. My generation is interested in freedom of speech,” Thomas said.

“I think he’s got a really good point. It’s just a flag, and in and of itself, it doesn’t have any racial meaning. It only has as much meaning as you put into it,” said Reed.

That’s about it.  The flag was a “communication symbol”… you know, guys waved them back and forth to send signals.  The student in question doesn’t seem to have any interest in the Confederate war nor does his display of the flag seem to have much to do with the Civil War era at all.  So much for Confederate/Southern heritage.  That hasn’t prevented the Confederate heritage community from embracing him as their latest hero.  In the past few weeks the most popular defenders of Confederate heritage include a middle school student from New Jersey and now this guy.  Hilarious!

Next post: A Challenge to the Southern Heritage Preservation Group

Previous post: That Was My Head That Just Exploded