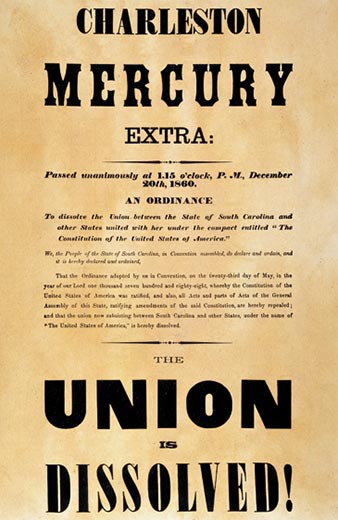 Please don’t hold your breath for an answer to this question.  To be honest, I don’t really have any interest in debating it nor do I really care whether secession was/is constitutional.  I suspect that apart from law school classes our answers to this question as both a historical and present proposition is largely determined by whether one believes that secession is necessary to correct some social or political problem.  While I certainly see plenty of social and political problems that need to be dealt with, at this point it seems to me that they can be best addressed within our present constitutional framework.

I’ve always found the passionate identification with those white southerners who advocated Southern nationalism and secession in the years leading up to the Civil War to be disingenuous or at least open to scrutiny on a number of counts.  In certain circles the question is debated in the abstract, but what I find troubling about the way I see many people play this game is the tendency to place themselves in a direct line to specific historical actors.  They play the role of rightful inheritors of a certain argument or movement and in the process blur the distinction between the present and the past: In short, “What was their fight is our fight.”

Of course, the cost of such a close identification is almost always an understanding of the complexity of the relevant past.  In this case we lose sight of southern unionism. We often mistakenly equate the Confederacy with the South and Southern nationalism is understood as an all or nothing proposition.  The list goes on.  The bigger problem as I see it, however, is the tendency to treat the arguments for secession in 1860-61 in a vacuum.  We end up embracing what we assume was inevitable without having to concern ourselves with the fact that these ideas/beliefs/ideology were part of a lived history filled with doubt and conflict.

Paul Quigley brilliantly explores this in his new book, Shifting Grounds: Nationalism and the American South, 1848-1865

Throughout the 1850s, and into the secession winter of 1860-61, the majority of white southerners clung to the Union.  They were proud American nationalists who regularly and easily enumerated the benefits of belonging to what they saw as the best country in the world.  Yet maintaining their attachment to the Union became increasingly difficult, beginning with the sectional discord of 1846-51 and continuing through the Kansas affair,  John Brown’s Raid, and finally the secession crisis of 1860-61.  Nationalism became problematic for white southerners.  It provoked increasing debate and uncertainty, not only in the formal politics of Washington, D.C., and the various state capitals, but also within local communities, families and even individuals. (p. 88)

Of course, the difficulties of maintaining those bonds of affection for the nation centered around the debates on the expansion of slavery as well as the future of the institution in the places where it already existed.  It’s no surprise that those who identify most closely with white southerners during the secession crisis continue to insist that slavery was not the central issue on which these debates turned.  Yancey, Rhett, and the rest of the gang would be the first to disagree, but that is not the only element of the debate that is lost and it may not even be the most important:

Southerners actively engaged with these issues, thinking carefully and arguing passionately about the underlying concepts of nationalism, citizenship, union, and disunion.  They wove these concepts into the fabric of their lives and personal identities, employing the language of affection and the metaphor of romance, for instance, to contemplate their shifting attachments to the Union, to their northern compatriots, to their region, and to their states.  For many southerners, the bonds of sympathy and affection that were supposed to join them to northerners in a harmonious national community were disintegrating, jeopardizing the value of American nationalism itself. (p. 88)

I agree with the popular narrative that suggests that one of the things Americans inherited from the Civil War generation is the question of the proper relationship between the federal government and the individual states, but that is an abstract question that can be explored in relationship to any number of events in American history.  What Quigley reminds us of is that the substance of this specific debate in all of its manifestations on the personal, local, and national levels is not ours.  We are not living their personal and collective narratives.  Here is what I take to be Quigley’s crucial observation:

In the years preceding secession, white southerners felt the “pinch” of the Union as membership in the United States came to be seen more of a liability than a benefit.  This was not a straight road, and the final outcome of an independent Southern Confederacy was by no means preordained.  Nor was it an easy journey: reevaluating their connections to northerners and to the United States generated no small measure of sorrow, ambivalence, and friction among white southerners.  Nationalism, citizenship, allegiance–these were becoming ever more important, ever more complicated, ever more painful issues in the antebellum South. (p. 88)

What I like about this passage is that while we may have a deep need to know and identify with our past it is also important to observe and attempt to understand it from a healthy distance.  Failure to do so runs the risk of embracing the outcome without any understanding of the broad spectrum of stories of how specific individuals arrived at their positions, why their beliefs changed over time, and an appreciation for the uncertainty and fear that was present throughout.  We are unlikely to get any closer to these answers or an appreciation of the times in which they lived as long as we approach the study of history in a way that simply satisfies our own needs and agendas.