A Black Confederate Without the Black Ancestor 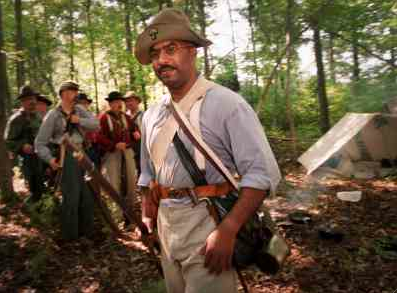 I am making my way through a small collection of essays in Thomas Brown’s Remixing the Civil War: Meditations on the Sesquicentennial

(Johns Hopkins University Press, 2011).  Fitz Brundage opens his essay on African American artists, who have interpreted the Civil War in recent years, with a reference to Willie Levi Casey.  You can see Casey in the image to the right and while I’ve seen it on a number of websites, up until now I didn’t know anything about his background.

While Casey is dressed to commemorate those black men who “served” in Confederate ranks and “support preserving Southern history and telling it the way it is,” his connection to the war does not end with a black individual at all.  Here is an excerpt from one news item that I found online:

Casey’s persona as a re-enactor is a free black cabinetmaker from eastern Tennessee, able to read and write, with a wife and a child at home. But he has a real-life link to the Confederacy as well–one he always vaguely knew about but pinned down only in recent years.  Casey grew up in Cross Anchor, S.C., in the 1960s and ’70s. It was an area full of Caseys, black and white.  He and his siblings knew they had a white great-grandfather, a man who had never married their American Indian/African-American great-grandmother even though they had six children together.  A family photo of the couple’s son Barney Casey shows a bulky man in overalls with lank gray hair and white skin. He’s Willie Casey’s grandfather.  Willie Casey was well into adulthood when he decided to research the white side of his family.  In the course of his genealogical effort he came across the Civil War record of one Pvt. Martin Luther Casey, a South Carolina soldier killed in 1862. That man was the older brother of Casey’s great-grandfather.  Being a collateral relative of a Civil War soldier qualified Casey for membership in the SCV.

Interestingly, websites maintained by H.K. Edgerton and J.R. Vogel conveniently overlook the fact that Casey’s ancestor is not black.

OK, so I readily admit that I am confused.  On the one hand Casey was accepted into the SCV based on his connection to the brother of his great-grandfather.  The living interpretation that he adopts for reenactments and other events, however, is based on a fictional character whose connection to history is tenuous at best.

I guess what I am having trouble understanding is that in his effort to ‘tell it the way it is’ he ignores what has to be a fascinating Civil War legacy in the story of his great-grandfather and great-grandmother.  Why doesn’t Casey do the necessary research to interpret the offspring of his great-grandparents?  That would go much further in challenging the public to expand their understanding of slavery and race relations at a critical point in American history. I am sure the SCV would be more than happy to accommodate such a living memory of one’s Civil War ancestors.

Instead, we are presented with nothing more than the same tired commentary that reinforces outdated tropes that paint the Confederacy as some kind of experiment in civil rights.