Where Have You Gone, Benjamin Butler? 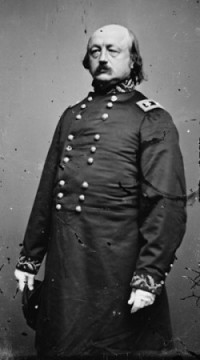 I’ve caught bits and pieces of the Museum of the Confederacy’s “Person of the Year: 1862” symposium on CSPAN-3.  It’s an entertaining event for the children of the Civil War Centennial.  The historians in charge of nominating this year include Robert K. Krick, David Blight, James McPherson, Jack Mountcastle, and Emory Thomas.  The historians selected are all familiar to the audience and their selections, for the most part, are predictable. Can anyone imagine Krick selecting anyone else but Jackson or anyone but Lee for Thomas?  Blight chose Frederick Douglass, which is not surprising.  McPherson’s choice of Farragut may be the only one that couldn’t be predicted.  I don’t know what to make of Mountcastle’s choice of McClellan since I am not familiar with his scholarship.

There is nothing wrong with their selections since this is clearly not a question that has a final answer.  There is also nothing necessarily wrong with the selection of historians.  All of them are well respected scholars.  That said, I do have a few suggestions for next year.  Get a panel of younger historians, whose choices may not be so predictable.  Not only are you likely to get a different short list of nominees, but the Q&A will also be an opportunity to explore new terrain rather than rehash the same tired stories.   You have to include at least one woman and an African American.  In short, perspective is everything when it comes to these kinds of events.

So, who would you choose?