Sons of Confederate Veterans Kicked Out of St. Paul’s Episcopal 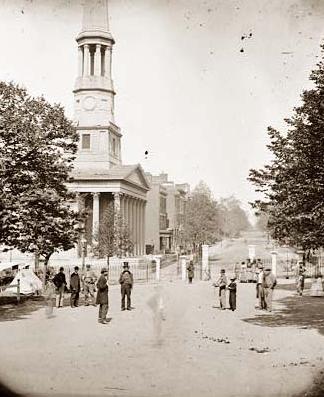 Robert E. Lee, Stonewall Jackson, and Jefferson Davis all prayed at the church at one point or another during the war.  It was there in April 1865 that Davis learned that Richmond must be evacuated.  So, why the cold shoulder?  It’s hard to tell at this point, but here is what we know.  Yesterday the Sons of Confederate Veterans held their National Heritage Rally in the city, which was to include a panel discussion titled, “Debunking the Myth of the White Confederate Military” at the church  The panelists were to include Teresa Roane archivist at the Museum of the Confederacy and Eric Richardson, who is currently a graduate student in history at North Carolina Central University.  I’ve heard through the grapevine that he is doing some very interesting research at the MOC.  It is highly unlikely that the title of the panel or the panelists themselves were responsible for the church’s change of heart.  The panel was to be followed by a revival service at the church.  Apparently, some time on Friday church officials canceled the event.

The day began with a small rally of SCV faithful at the Lee monument on Monument Avenue.  At least one unit marched while chanting the following:

What do we do?

Would you want these people in your church?

Note: Updates will be posted as more information becomes available.