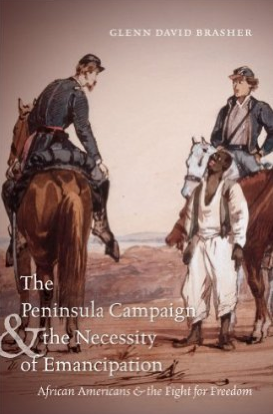 Given the frequency of posts on this site concerning the myth of the black Confederate soldier I wanted to point out the release of a new book that many of you will want to consult.  I’ve been looking forward to Glenn David Brasher’s book, The Peninsula Campaign and the Necessity of Emancipation: African Americans and the Fight for Freedom, for some time and having completed two chapters I can now say it was worth the wait.  Brasher provides an overview of history on the Virginia peninsula and analyzes the ways both free and enslaved blacks influenced the strategic and tactical decisions of both armies during the spring campaign of 1862.  Brasher believes that the influence of African Americans on the Peninsula Campaign and its ultimate outcome is more important that Antietam in leading to leading to Lincoln’s Emancipation Proclamation.

The most important important analytical point that Brasher has made thus far is that there was nothing inevitable about black loyalty to either side during this period.  So much of the discussion surrounding black Confederates is about who can claim a moral victory for their respective side.  It’s nice to remove this issue from our own soiled hands and place it back in a more strictly defined historical context.  Many of the slaves who risked their lives by imposing themselves on Union forces at Fort Monroe and elsewhere remained uncertain as to whether their status as contraband would translate into real freedom.  And while Brasher acknowledges the presence of slaves in Confederate ranks, he reminds us that even those who may have taken shots at Yankees may have done so for reasons that have little to do with loyalty to the Confederate cause and master.

Ultimately, this book is about the place of free and enslaved blacks in our understanding of a military campaign and the course of the war in 1862.  What we ultimately learn is why the United States eventually recruited blacks into the army by early 1863 and why it took the Confederacy much longer.