Are You Offended By This? 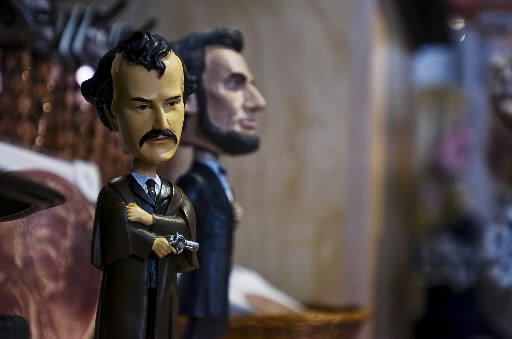 Update: The bobbleheads have been removed from the shelves at the Gettysburg Visitor Center.

“I don’t think it’s right to sell a memorial of him, he assassinated President Lincoln,” said Patrick Nee, a 17-year-old who attends the Tatnall School in Wilmington, Del.

“Maybe there’s a place for these, but not here in Gettysburg,” said their 11th-grade history teacher, Ruth Hiller.

Harold Holzer, perhaps the most prominent Lincoln scholar alive, agreed Lincoln’s death should not be trivialized, nor his killer celebrated with such a souvenir.

“I’m not a fan of censoring things, but I do think there is an awfully sick marketing person who came up with this idea,” Holzer said when contacted for this story. “It’s not a joke that someone who is a murderer and a criminal is celebrated in any way.”

“I would say it’s pretty sleazy. It’s almost like promoting the assassination,” said battlefield visitor Tracy Chronister, of York. “Why would you celebrate that with a bobblehead?”

There is a market for those people who glorify and revel in our Civil War.  We went down this road a long time ago.  I am no more offended by a John Wilkes Booth bobblehead than I am about 90% of the crap that is sold in Civil War gift shops.  All of it trivializes.