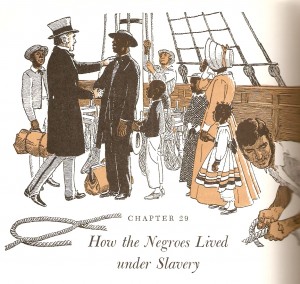 Will Moredock has a wonderful editorial in today’s Charleston City Paper that provides some sense of why a Robert Smalls Weekend is so significant.  All too often the study of Civil War memory seems like an abstract exercise, but in this case it is grounded in something that all of us can relate to: history textbooks.  If you want to explain why the city of Charleston is now in a position to commemorate Smalls look no further than the pages of your child’s history textbook.  Not too long ago many of them were filled with all kinds of myths and distortions about black Americans and slavery.  Moredock shares excerpts from Mary C. Simms Oliphant, The History of South Carolina, which was used in the state as late as the mid-1980s.  Oliphant was indeed the granddaughter of William Gilmore Simms, but what Moredock does not mention is that her 1917 textbook was a revised version of Simms’s own history of the state written in 1860.

Here are a few selections:

On the Civil War

It’s a textbook that Mildred Rutherford and the United Daughters of the Confederacy would have embraced.

This weekend’s commemorative activities in Charleston are about much more than Robert Smalls and the city’s collective past.  Public events such as the dedication of a marker to Smalls and other educational events are a statement of a community’s values and its commitment to moving forward on the racial front.  More specifically, such events constitute a set of expectations of- and confidence in the community’s next generation.

Previous post: Robert Smalls Weekend in the Crucible of Secession