It’s one thing to get advanced praise from scholars such as David Blight and Earl Hess, but you really can’t beat the honest assessment from my friends in the Southern heritage community.  Consider the following Facebook thread from my old buddy, Carl Roden (aka Amanda). It’s nice to know that my book is on their radar screen and if it makes for some comfortable toilet paper then so be it. 🙂 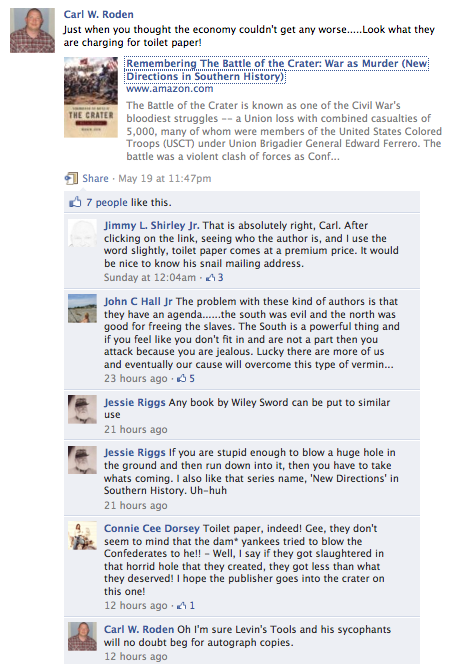 This last comment didn’t make it into the screenshot:

“I will guarantee you that Amazon will not allow the “Reviews” to this book that will come in. Levin is just like the rest of the POG’s that Michael Phipps often refers to, for those who have no concept of what a “Military Experience in War” is like. Perhaps, that why someone like Edwin Bearss, a Marine Combat Vet was so successful in his writing about the battles that took place. Levin was trying to “Construct a Narrative” that there was an Attempt by the Southern Defenders along the Jerusalem Plank Road by the St. Johns Blandford Church in putting down a “Slave Rebellion”. How utterly Ignorant, Stupid, Moronic, and Ass-Backwards from what was happening, with the Courageous and Determined Defense of a Break in the Lines. The Fool just does not get it, not matter how many “Contortions” and “Revisions” he engineers into the Narrative.”

Rest assured that no reviews will be censored on the Amazon page.  The more attention, the better.  Keep it coming and thanks for acknowledging my book.

Next post: “Evilizing” or Explaining Confederates at the Crater

Previous post: Is There a Doctor in the House?