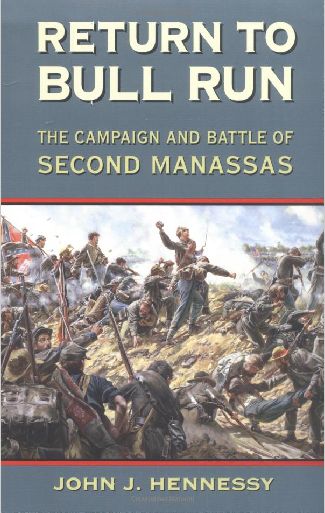 I have plenty to share about this past week’s CWI at Gettysburg College.  It was an honor to be asked to speak and I had a wonderful time meeting and talking with the participants.  Peter Carmichael has done a fabulous job as the institute’s new director and I look forward to returning in 2014 to help mark the events of 1864.  While there were many highlights that I hope to share over the course of the next few weeks the most rewarding experience of the conference was spending the day with John Hennessy on the Second Manassas battlefield.

I first met John in 2007 as I was working on the final chapter of my Crater manuscript, which addresses recent interpretive challenges on the Crater battlefield and elsewhere.  John was kind enough to meet me to talk about interpretation and since then we have remained good friends.  No one has taught me more about public history and I consider John to be something like a mentor. [Buy John’s book.

Some of you know that while I enjoy visiting battlefields I am not preoccupied with tactical details.  I do not give much thought to the alignment of units or try to nail down exactly where they were. Give me an overall sense of what happened and I am good to go.  I’ve never given much thought to Second Manassas beyond the strategic level; in fact, this was my first time on that particular battlefield.

To watch John lead a tour is to watch a masterful storyteller, who has thought deeply about what the battlefield has to teach us.  He moved seamlessly between the strategic and tactical levels as well as the political implications of the campaign as it unfolded.  He even asked the group to reflect on questions related to memory.

We stopped at places like Brawner’s Farm, the unfinished railroad, and Chin Ridge and John went into great detail about the action that took place there.  John, however, didn’t simply describe the action that took place there and share first-hand accounts, he explained why doing so is important.  He suggested that we need to engage in a little imaginary discipline and understand that the ground under the soldiers feet at any given moment constituted the entirety of the battle.  This was a revelation to me.  I’ve always remained detached from this perspective since I was only interested in the larger picture, but for the first time I was able to see the battle as a collection of more localized encounters that were self contained for the men involved. How the broader battle might unfold is irrelevant from this perspective.  What matters is maintaining formation, holding ground, and looking after the man next to you.  The result was a personal connection to a battlefield that I have not experienced anywhere else.