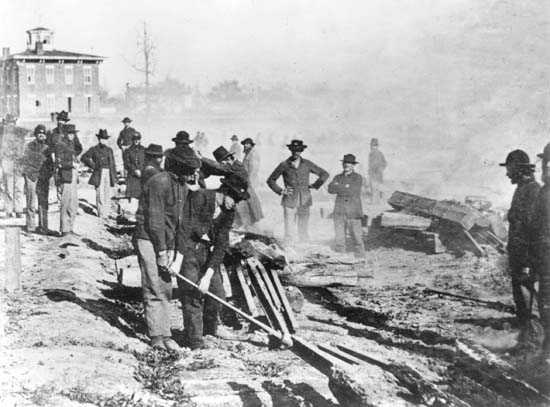 As a quick follow-up to yesterday’s post on Sherman and Civil War memory I thought it might be helpful to cite a passage from William G. Thomas’s new book, The Iron Way: Railroads, the Civil War, and the Making of Modern America

.  No image of Georgia in 1864 is more iconic than that of Sherman’s men destroying southern rails and turning them into what became known as Sherman neckties.  The destruction caused by Sherman’s army almost always eclipses the rebuilding that took place immediately following the war.

Reconstruction of the South in this respect was literally re-construction, a fact long obscured in the era’s twisted history, which the white South remembered long as punishment and subordination, conveniently forgetting the generous terms of their restoration….

No railroad suffered more than the Western and Atlantic (what Wright called the Chattanooga and Atlanta) because of both Union army maneuvers across it and Confederate cavalry raids against it during the Atlanta Campaign in the summer of 1864.  The Confederates tore up twenty-five miles of the railroad in a massive raid aimed at disabling the Union’s key supply route.  And in an effort to cut off Atlanta from external communication, Sherman just before his November March to the Sea, “very effectually destroyed the road” and gave orders for Wright’s Corps to remove sixteen miles of track between Resaca and Dalton.  Yet, after Sherman’s March was completed, Wright’s Corps went back to Atlanta and rebuilt nearly all of the Western and Atlantic, laying down 140 miles of new track and cross-ties, raising 16 bridges, and erecting 20 new water tanks.  Close to $1 million in construction labor and $1,377,145 in new material were expended on the Western and Atlantic before turning it over to the state of Georgia and its original corporate officers in September 1865. (pp. 183-84)

According to Thomas, in less than one year rail service in the South had been largely restored.  The book details the rebuilding that took place throughout the South toward the end of the war.  I highly recommend it.

Previous post: You Are Not a Victim of Sherman’s March