Vandalism at the Shaw Memorial 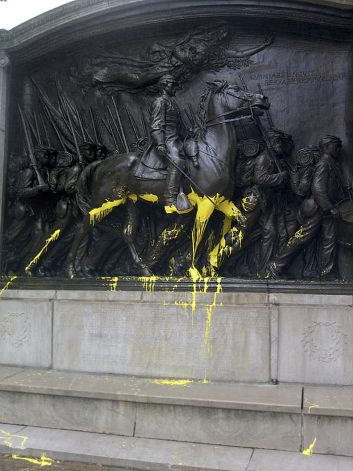 Like many of you I was saddened and outraged to hear that the Shaw Memorial here in Boston had been vandalized.  The alleged perpetrator is a 38 yr. old black woman from nearby Quincy.  While she admitted to having an interpretive issue with the memorial, following her arraignment yesterday it was learned that she will undergo a psychiatric evaluation.  I decided to write a little something for my column at the Atlantic, which you can now read, but before doing so I posted some questions about the possible racial implications of this act on my personal Facebook page.

Thanks to Brooks Simpson, Harry Smeltzer, James Percoco, Donald Shaffer, and John Rudy for sharing their thoughts.  The thread went on for some time and it gave me quite a bit to think about.  Brooks is right that the thread is a good example of the “usefulness of social media in advancing historical discussion.”

Click here for the rest of my posts at the Atlantic.