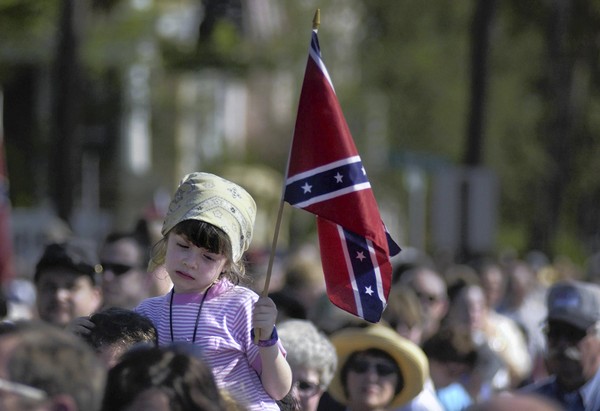 Popular media really does have a great deal of influence over how we frame our public discourse about Civil War memory.  We can see this most clearly in what I’ve dubbed the Continued War narrative, which assumes a nation divided along racial and/or regional lines.  Reporters love to utilize this narrative when discussing controversies over how we discuss the tough questions of race and slavery and especially the public display of the Confederate flag in the South.  This story out of Charlotte is a perfect example.

As everyone knows Charlotte will host the Democratic National Convention in September.  The city has a need to demonstrate to the rest of the country that it is not mired in the controversies of the past, but “remnants of the Old South linger in our region – and none as divisive as the Confederate flag.”  Really?  How do we know this?  Just ask a couple of guys who still fly the flag.

“Heritage,” Barrett said when I asked why he flies the Confederate battle flag.  “Heritage,” said Kevin Wooten in nearby Gaston County, who had a Confederate flag in his yard mounted in the back of a broken-down pickup truck. Up front, an American flag flew from out of the hood where the radio antenna used to go.  “It’s nothing about no hate against anyone,” said Wooten, 55, a mechanic by trade who enjoys wrestling and drag racing. “I have black friends I care about more than some of my white friends. But … .”  There’s often a “but” when you talk about the flag.  “I’ve lived here since I was a little rascal and my daddy always had an American flag and a Confederate flag, and I do, too,” Wooten said. “My great-grandfather fought in the Confederate Army down this way. I know a lot of people don’t like the flag, but I don’t see that as a problem.”

Of course, the reporter can’t let them get away with such a distorted view so she interviews a local history professor:

David Goldfield, a historian at UNC Charlotte, believes it’s fine to embrace your ancestors. But Goldfield, who wrote “Still Fighting the Civil War: The American South and Southern History,” suggests it’s time people brought the Confederate flag indoors.  “It offends a lot of people,” he said. “I tell them, ‘If I were in your position, I might have the Confederate battle flag in my house, but not necessarily fly it out in front of my house if it offended my neighbor.’ It’s just a matter of civility. It’s not a question of who’s right or who’s wrong.”  The fact that after 12 years the NAACP is still boycotting South Carolina because it flies the Confederate flag on the State House grounds is as clear an indication as any that the flag remains divisive. Hate groups use it as a symbol. Even back when the flag was first adopted, Goldfield said, it was closely allied to white supremacy.  “There’s no debate among historians today that slavery caused the Civil War,” Goldfield said, “and that the banner Confederate troops carried into battle was supporting a nation that predicated itself on the protection and extension of slavery.”

The reporter concludes by reassuring us that the views expressed by Barrett and Wooten are not her own and suggests to her fellow southerners that it is time “we put it [Confederate flag] away.”  What we never learn, however, is how prevalent the Confederate flag is in the Charlotte area.  Does it even merit this story?  One wonders how this reporter even found Barrett and Wooten.  I can imagine her asking a colleague or friend how she might go about finding a couple of guys in the area who still fly the flag. This is nothing more than a manufactured controversy.  Perhaps that’s a bit of a stretch, but you get the point.

The people of Charlotte can rest easy that the DNC is not going to be an opportunity for the rest of the nation to count Confederate flags.