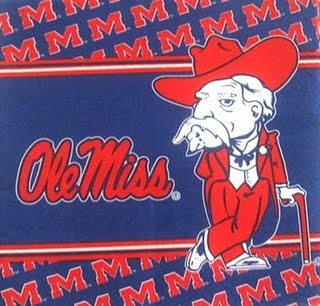 Thanks to everyone who left a comment on the student video about some of the challenges surrounding the place of Confederate memory at the University of Mississippi.  I wanted to share the following comment from Boyd Harris, who is a PhD student in history at Ole Miss:

Thank you for posting this video, Kevin. I am a third year PhD student at the University of Mississippi. Needless to say, this is not the first time I have seen this video. The legacy of slavery, the war, and racism is very apparent on the campus landscape. We have a Confederate cemetery (right behind the basketball stadium) and several statues and markers commemorating the Civil War. The Lyceum (the oldest building on campus) has visible bullet holes from the 1962 riot, when James Meredith needed the National Guard to just register for classes. Even the name “Ole Miss,” which was created in the early 20th century and is a variation on what slaves called the mistress of the plantation denotes the South’s racialized past.

But let me tell you about the students. A lot of the conversation about this video has dealt with Hannah Loy’s views. Have I met people like that here? You bet, but they are in a quickly growing minority. Teaching the American history surveys (History 105/106) has provided me with ample opportunity to observe discussions about slavery, racism, and the Civil War. What amazes me every semester is the eagerness of the students to talk about these complex and difficult topics. The students bring their own observations and biases to the conversation, but more importantly, they also bring a desire to gain further knowledge about their past. I never have to prod my students to discuss these issues. I mostly take on the role of moderator in order to ensure an open and safe environment for these discussions.

I wish I could say that we change everyone’s mind, but of course that is not true. What I can say, however, is that I am seeing progress at the University of Mississippi. In the past two years I have seen Colonel Reb discontinued as the mascot and James Silver honored at the university that shunned him fifty years ago. This year the William Winters’ Institute for Racial Reconciliation will operate a tent in the Grove on game weekends. The goal is to challenge the long held view of African Americans that the Grove is a Whites-only space. Progress will be slow, after all this is Mississippi, but I have witnessed first hand the possibility of change at the University.

Boyd’s comment reminds us of the importance of the generational divide that shapes how Americans remember the Civil War.  The standard narrative can be found in this recent news article that described the sesquicentennial in Mississippi as “angst-filled.”  No doubt, you can find a great deal of strong emotions there, but we should not lose sight of the fact that young Americans are much more open to talking about some of the more difficult questions in an open and honest manner.  I saw this first-hand as a history teacher in Virginia.