“Obama Has Been Bloodied By It”

Update: It looks like the SHPG decided to take down the post, which should not come as a surprise to those of you familiar with this group. 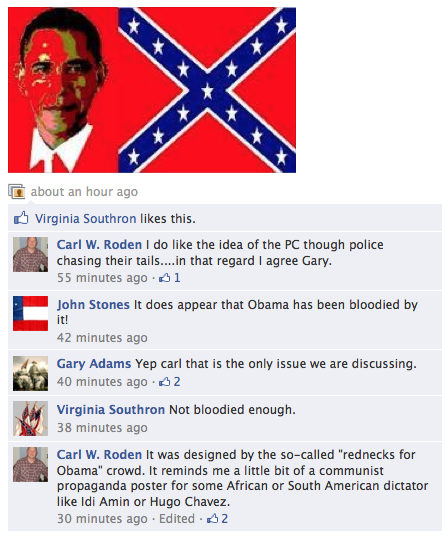 I hesitate sharing this with you, but it is another wonderful example why the Confederate flag is slowly receding from public view.  It should come as no surprise that this screenshot comes from the Southern Heritage Preservation (facebook) Group.  The image was posted by Gary Adams, whose commentary is unintelligible.  Now I have no idea who is responsible for this sick image, but what I find incredible about the comments that follow is that these are the same people who claim with a straight face that the flag does not have racial overtones.

Anyone with even a little knowledge of American history knows the dark story of lynching and organized violence against African Americans during the 1950s and 60s – often in full view of a Confederate flag.  John Stones doesn’t know how right he is.  Many African Americans have been bloodied by that banner and given his role as group administrator one would think that Stones would be more careful if we assume that he simply does not understand the historical context of his own words.  In this case I am not going to give Stones or “Virginia Southron” the benefit of the doubt.  They mean exactly what they say.

Next post: Is The Irrepressible Conflict School Making a Comeback?

Previous post: The American Paradox of Slavery and Freedom