Lincoln, Obama, and Christie Show Us the Way 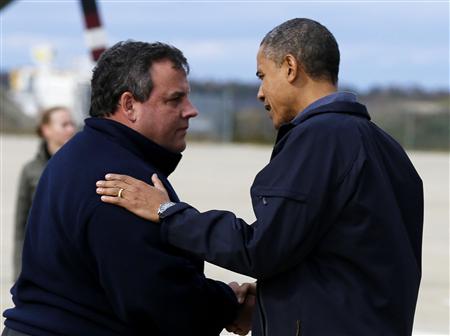 The decision to delay the premiere of Steven Spielberg’s Lincoln until after November 6 is a facile attempt to disassociate it from the presidential election.  It’s unavoidable and doomed to give us a skewed view not only of our own political climate, but that of the 1860s as well.  Hurricane Sandy may have caused unprecedented destruction in places like New York City and New Jersey, but for a brief moment it paved the way for what appears to be an apolitical embrace between Republican Governor Christie of New Jersey and President Obama.  Whether it is apolitical is not so important as that it is perceived by many on both sides of the aisle as a welcome respite from the usual vitriol for the purposes of aiding those in need.

For those who can’t seem to put aside party politics, Jason Bailey, of the Atlantic, suggests spending some time with Spielberg’s Lincoln.

One of Lincoln’s emotional high points comes when Stevens, a vehement abolitionist who seeks racial equality in all matters, must take to the House floor and deny the full scope of his views. By insisting that he only seeks equality under the law, he can secure moderate votes for the [13th] amendment. But it is a matter of pride for the stubborn and steadfast congressman; his fellow legislators plead with him to keep his passion in check. “I beg you, sir, compromise,” one tells him, “or you risk it all.” Stevens swallows hard, goes to the floor, and soft-pedals his most deeply held beliefs. It is not a proud moment, but it is treated as such by the filmmakers, and when the amendment carries, Stevens says it was “passed by corruption, aided and abetted by the purest man in America.” When Lincoln is pressing his advisers to make the vote happen, his language is plain: “See what is before you. See the here and now. That’s all that matters.” And when it is done, he notes that, against odds, they have shown the world “that democracy isn’t chaos.”

I guess we can call this the ‘Lincoln Shows Us the Way” narrative.  To be fair, Spielberg is no doubt picking this up from Doris Kearns Goodwin’s Team of Rivals

, on which the film is loosely based.  It’s a very seductive narrative for those who are under the spell of talking heads and other commentators who constantly drive home the point that this country has never been more divided and that we need to return to some sort of golden age of political compromise.  Bailey concludes his essay with the following:

Those are the words that resonate most in Lincoln‘s two-plus hours. After a term plagued by obstructionism, gridlock, and pettiness, it certainly feels as though our broken political system is nothing but chaos. Lincoln shows that it wasn’t always that way. And Christie proves that it doesn’t always have to be.

The film focuses specifically on the final few months of the war and Lincoln’s presidency.  One wonders, however, if Lincoln and the 1860s would be so attractive to Bailey and others if the film was set in 1860-61 as the nation split apart.  My point is not to ignore entirely the kind of compromising that went into the passage of the Thirteenth Amendment or its importance, but we should remember that half the nation was not involved in this debate.  The Civil War represents the ultimate failure of American democracy and Lincoln is at the center of that story.  How many Americans had already died by the time we get to the historical setting of this movie?  Let’s not cherry pick the historical record just because we are looking for a little light.